Sakaki to step away from presidency effective July 31. Interim president to be in place for 2022-23 academic year.
June 6, 2022 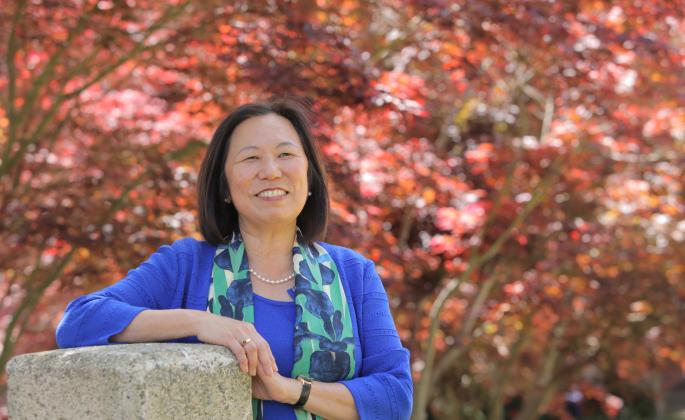 Judy K. Sakaki to step away from presidency at Sonoma State, effective July 31, 2022.

Judy K. Sakaki, Ph.D. announced today that she will resign as president of Sonoma State University (SSU) effective July 31, 2022. The CSU Board of Trustees will thereafter begin a national search for the 8th president of SSU. An interim president will be announced shortly.

“Serving as Sonoma State President has truly been an honor. After thoughtful reflection and discussions with my family, I made the decision to step away as president of this wonderful campus,” stated President Sakaki.

“I care deeply about Sonoma State and believe this choice will allow the campus community to move forward in a timely manner. I am incredibly grateful to the entire SSU and the North Bay communities for the opportunity to serve during such a challenging and transformative time at Sonoma State. Our students, faculty, staff, alumni and community partners have been exceptional, and I will forever treasure my time serving as SSU President. I am humbled and honored to have led this campus for the past six years.”

Sakaki leaves a legacy of accomplishments at SSU. She became the seventh president and the second woman to have served as president in its 62 years. She is also the first Japanese American woman to serve as a university president in the United States. During her tenure, she transformed Sonoma State into a student success focused campus. First year student graduation rates have steadily improved, and the 2-year transfer graduation rate is the highest in the California State University. In her first year, SSU gained federal recognition as an Hispanic Serving Institution (HSI) and secured a Department of Education $2.75 million grant to Prepare Underrepresented Educators to Realize their Teaching Ambitions (PUERTA). She led the campus in the aftermath of the destructive Tubbs wildfire where 80 faculty, staff and students lost their homes. President Sakaki lost her home, possessions and nearly her life. After the fires, the campus re-opened with a Gratitude Gathering and she is proud of the culture of care that enabled all affected by the fires to resume their studies and work at the campus.

During her tenure, Dr. Sakaki strengthened community engagement at the university, including at the Green Music Center. She opened the Wine Spectator Learning Center and championed the Wine Industry Scholars Program (WISP) where family members of vineyard workers are encouraged to attend college and are provided with 4-year scholarships. President Sakaki developed a partnership with the Federated Indians of Graton Rancheria Tribal Council that enabled the expansion of the Summer Bridge Program and other initiatives. She created the Office of Diversity, Equity and Inclusion (DEI) and prioritized diversity and inclusion efforts on campus. Under President Sakaki’s leadership the Center for Transfer and Transition Programs, Dream Center, Lobo’s Pantry, Military and Veteran Resource Center, Seawolf Service Center and the Center for Academic Access and Student Enrichment (CAASE) were all created to better serve students. Additionally, philanthropy and grant funding support all have grown during her tenure.

Dr. Sakaki has dedicated her distinguished career to service and leadership in public higher education. She has served for over 40 years in various administrative positions in the California State University (East Bay, Fresno, Chancellor’s Office) and in the University of California (Davis, Office of the President). At her Presidential Investiture, then Ohio State President and now UC President Michael Drake, a mentor of Dr. Sakaki’s, praised her as “one of the bright stars of the education galaxy.” In 2017, President Sakaki was named “President of the Year” by the California State Student Association (CSSA). CSSA President David Lopez said, “Dr. Sakaki’s compassion and human touch, along with her stellar leadership, set her apart.” She was also honored as a National Association of Student Personnel Administrators (NASPA) “Pillar of the Profession” in 2017, an award given to exemplary individuals who have served as leaders, teachers and scholars in student affairs and higher education. Additionally, Dr. Sakaki was a founding board member of Asian Pacific Americans in Higher Education (APAHE), received the NASPA Region VI President’s Award in 2018, and was the Asian Pacific Islander (API) Legislative Caucus honoree for Excellence in Education in 2020.

Dr. Sakaki is a double alumna of the CSU, having earned both a bachelor’s degree in Human Development and master’s degree in Educational Psychology from CSU East Bay. She holds a Ph.D. in Education from the University of California, Berkeley.

“As someone who grew up in East Oakland, who was a first-generation college student, whose parents and grandparents were forced into internment camps because of their Japanese ancestry and who later earned the opportunity to become the first Japanese American woman to lead an American university, I am living proof of the power of higher education. I look forward to my continued involvement in opening doors and transforming the lives of individuals, families and communities through education,” said Dr. Sakaki.

“Throughout her career in higher education, President Sakaki has demonstrated a steadfast passion for the transformative power of a college degree,” stated Chancellor Jolene Koester. “We are grateful for her many years of service in higher learning including at Sonoma State and Fresno State.”

Wenda Fong, Chair of the CSU Board of Trustees stated, “President Sakaki broke the leadership glass ceiling in academia by being the first Japanese American woman to serve as a university president in the United States. We thank her for the contributions she has made to student success at Sonoma State University and wish her the very best with her coming endeavors.”