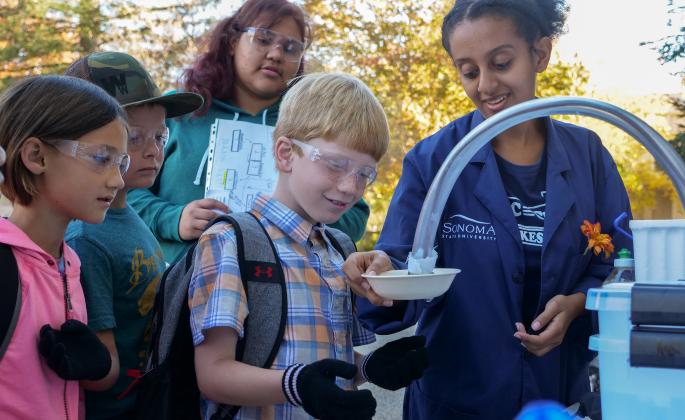 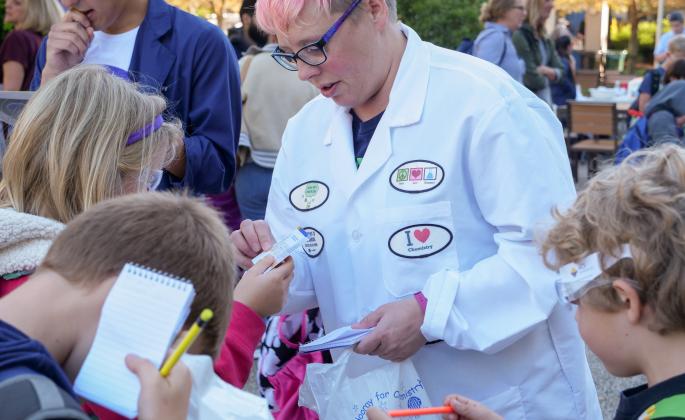 Chemistry Professor Dr. Jennifer Whiles-Lillig prepares a group of third graders to participate in a demonstration 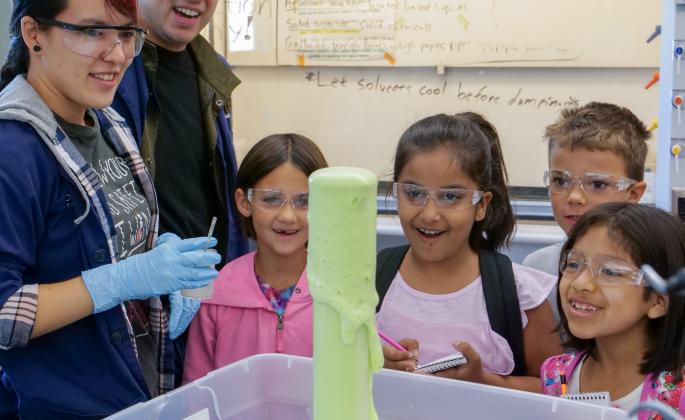 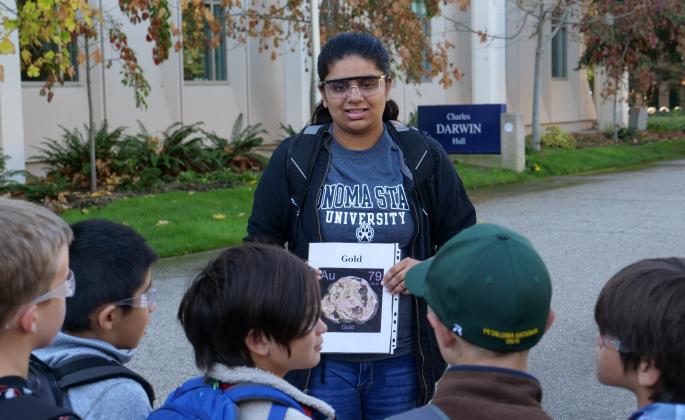 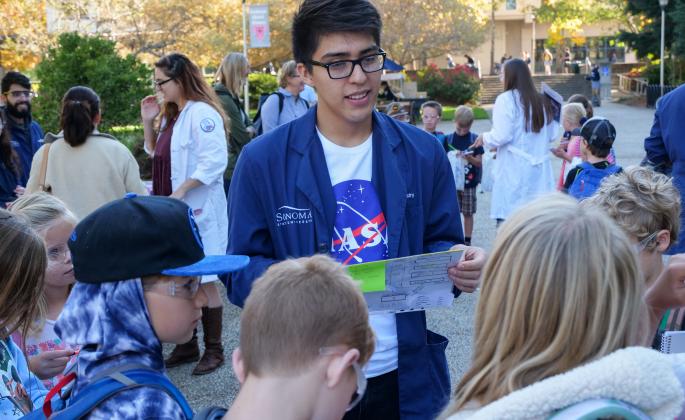 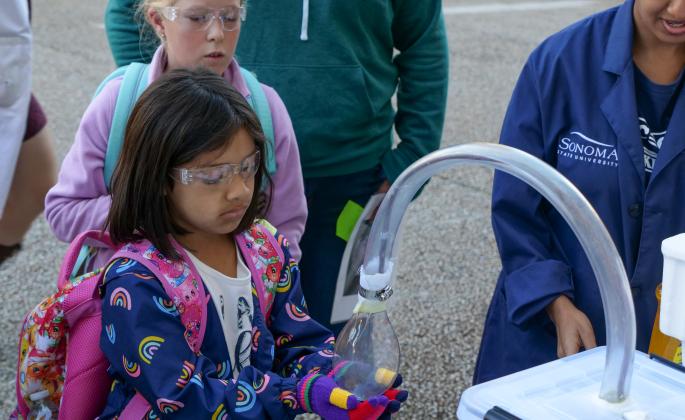 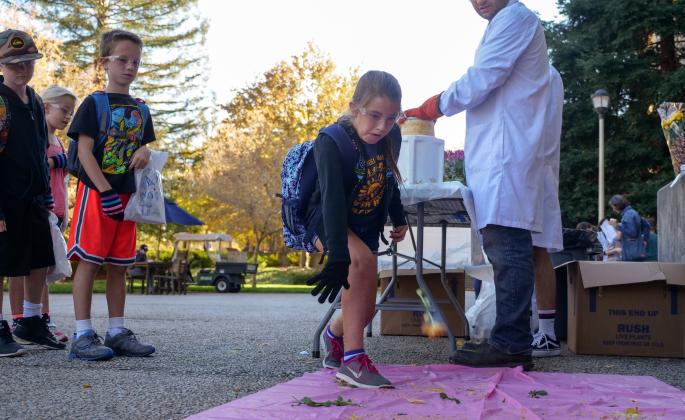 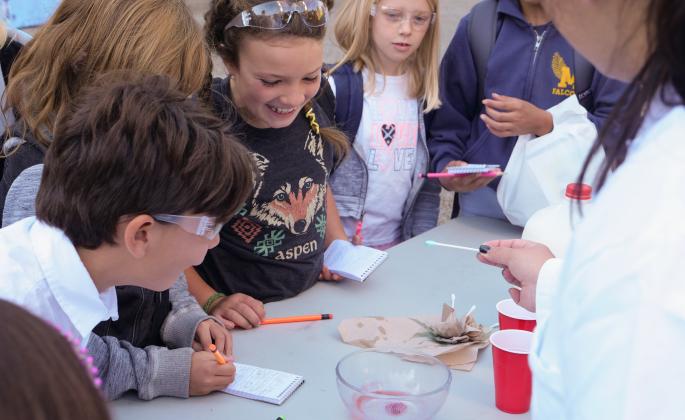 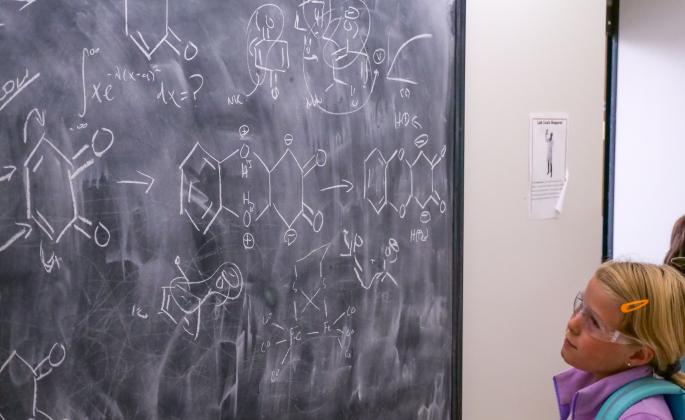 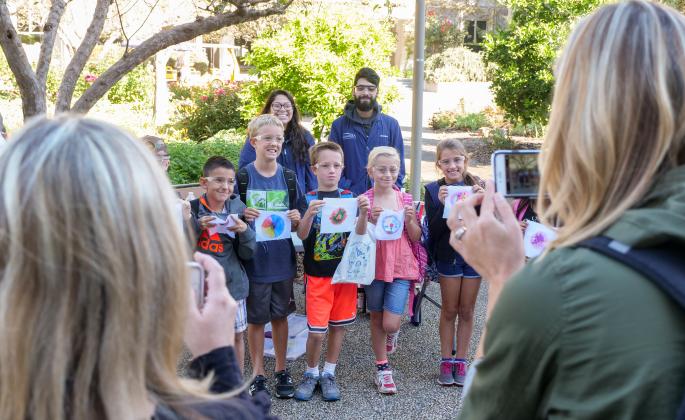 When a Sonoma State University chemistry student asked a crowd of curious third graders if anyone knew what yeast was used for, the response was accurate, but not quite expected. “Yeah, my dad uses that stuff to make beer,” replied a girl, who giggled along with her peers and the parent chaperones in the room when she added, “It smells.”

Dozens of local third graders visited Sonoma State on Oct. 26 as part of the SSU Chemistry Club’s annual National Chemistry Week outreach program. The student-run effort invites K-12 classrooms in Sonoma County to visit campus and participate in experiments to learn the finer points of chemistry — such as freezing flowers in liquid nitrogen and smashing them into hundreds of tiny pieces.

“Why do you think it breaks like that?” asked a Sonoma State student running the experiment outside Darwin Hall.

Not missing a beat, several students replied, “Because it’s frozen!” Thankfully, a chorus of “Let it Go” was nowhere to be heard.

The young students made hypothesis, took notes, and listened to the wise undergraduate and graduate students in Sonoma State lab coats explain what made each reaction take place. The annual outreach program is coordinated by students in the Chemistry Club, says SSU Chemistry Professor Dr. Jennifer Whiles-Lillig. She was on hand to help facilitate the multiple experiment stations both inside and outside of Darwin Hall, the university’s science building.

“It’s such a great event because not only do the younger students get to learn about science, but our students see the excitement of discovery in their faces,” says Whiles-Lillig. “Sometimes it reminds them of when they were that age, and why they wanted to study chemistry in the first place.”

Sonoma State University biology professor Daniel E. Crocker has been named an Academy Fellow at the California Academy of Sciences.

The Academy Fellows are a governing group of more than 400 distinguished scientists who have made notable contributions to one or more of the natural...