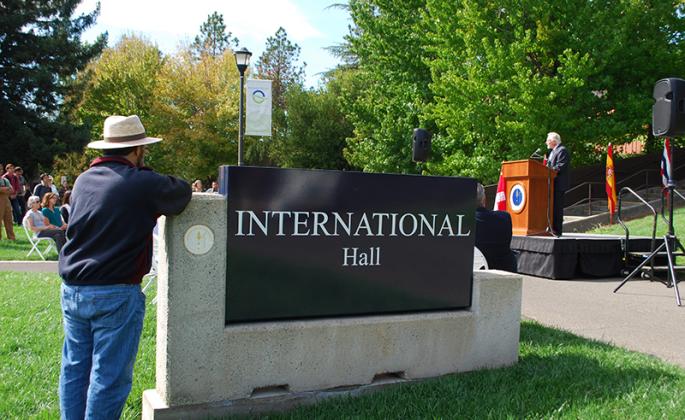 "The international students this semester are really involved, and they're having a ton of fun," says CIE Programs Assistant Milan Morales. "Having all of our programs in International Hall has really helped form a community."

This semester, CIE is hosting 43 international students from 15 different countries, with 11 ambassadors in the office. "We are more involved and hands-on with foreign students than before the move," says Morales. "We don't just give them an emergency number and say good luck -- we really try to be here for them."

According to the Institute of International Education, the number of U.S. study abroad students increased 5 percent in the 2013-14 academic year, and U.S. student participation in study abroad has more than tripled over the past two decades. Similarly, the number of international students studying in the United States grew to almost 1 million in 2014-15, up 10 percent from the previous year.

Besides being an invaluable resource for students interested in studying abroad, CIE has also established International Hall as the hub for foreign students. Ambassadors host culture meetings every Thursday and plan field trips and other activities for international students experiencing Sonoma State for the first time. These students often join clubs and play intramural sports to take advantage of the extracurricular environment they may not have back home.

CIE student ambassador Angie Durkee spent a semester in Spain before returning to the United States. As an ambassador, she gets to share her own experiences with the international community. "Helping students acclimate to our culture here, even by doing something simple like translating, is so rewarding," says Durkee.

Sonoma State University is bringing the international flavor to students on campus. International Education Week, Nov. 13-17, exhibits a celebration of different cultures from around the world.

For a full schedule of events, see...

Job opportunities for freshman and graduating seniors alike will be available at Sonoma State University’s annual Career Fair, where companies and organizations from across the Bay Area will be looking to hire SSU students.

This year, students will be able to...

With spring here already, summer is approaching ever so quickly. Sonoma State University's School of Extended Education is happy to announce that Summer 2012 classes are now open for enrollment. More than150 academic courses are being offered to SSU students, many of which fulfill GE...