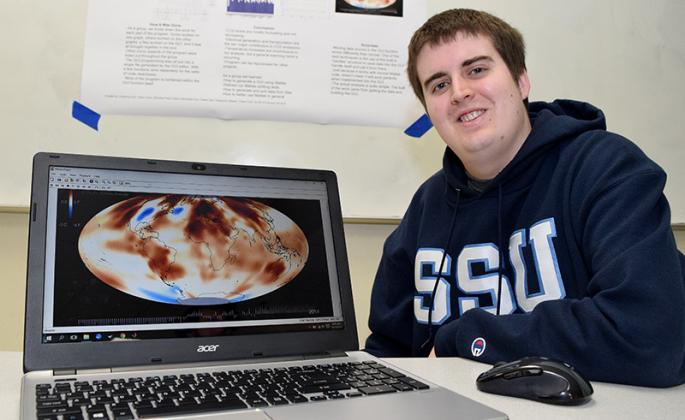 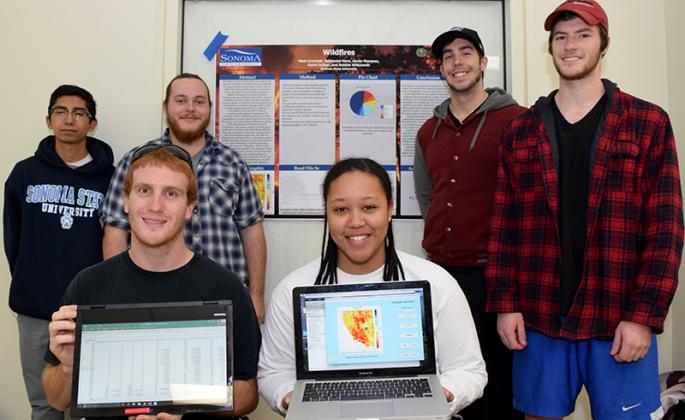 Aaron Marquez, Nate Horn, Rob Witkowski, Kevin Suiker, in back, and Tyler Spott and Miah Crockett, in front, show their data visualization tools during a final presentation for their engineering science class // Photo by Nicolas Grizzle

"For students, it's teaching them how to frame problems and present data to folks outside of their field in ways that is interesting to them," says Chris Halle, a lecturer in Sonoma State's engineering science department.

Halle was one of several experts in the department reviewing the final projects of a course called Technical Computing this week. Though they also made traditional poster presentations, students were tasked with taking data from government and other sources and creating interactive, comparative and visually enticing models on a computer. The process involves research, data entry, Excel worksheets, programming and communications disciplines.

One group presented data from wildfires in California from 1943 to 2012. "Some of the data from the early days, like the 40s through the 80s, was done on a typewriter," says Miah Crockett, a fifth year engineering science major. About half the time spent on the project, she says, was manually inputting the numbers from scanned PDF documents obtained from the Department of Forestry and other sources into their Excel spreadsheet.

Their project shows the causes and size of fires, laying them over each other in a bar graph that immediately paints a portrait of number of incidents versus amount of damage. The students imagine the data to be immediately useful for the agricultural industry, and may add categories for cost of damage and location of incidents in the future. "Fire managers don't have a data visualization tool like this," Halle pointed out.

Another project measured national CO2 output over time, broken down by states. "It was interesting to see a drop during the 2010 recession," says Taylor Jones, an engineering science major who worked on the project.

Other projects measured obesity, temperature trends in California, and personalized health statistics. The public data, now in its more useful visual form, could be transitioned to web-based displays, says Halle, if students choose to go that route.

This class was supported in part by an SSU Sustainability in the Classroom grant, the WATERS Collaborative, and the NatureTech! Collaborative.

On April 8 Sonoma State University is hosting the Sonoma County Adaptation Forum, the nation's first county-level climate adaptation forum. The focus is on keeping Sonoma County vibrant and resilient in a changing climate, and attendees will learn how to make climate friendly decisions and share...