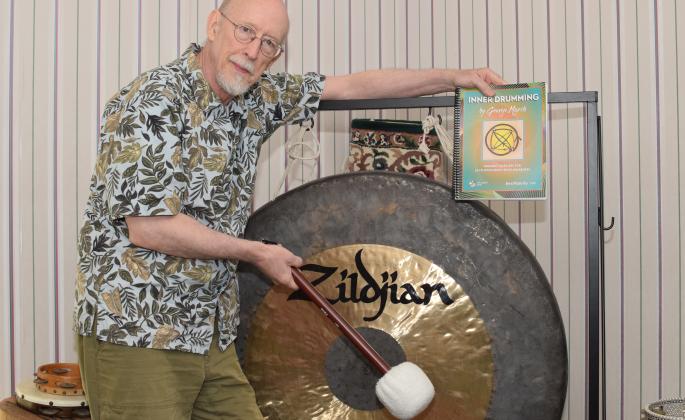 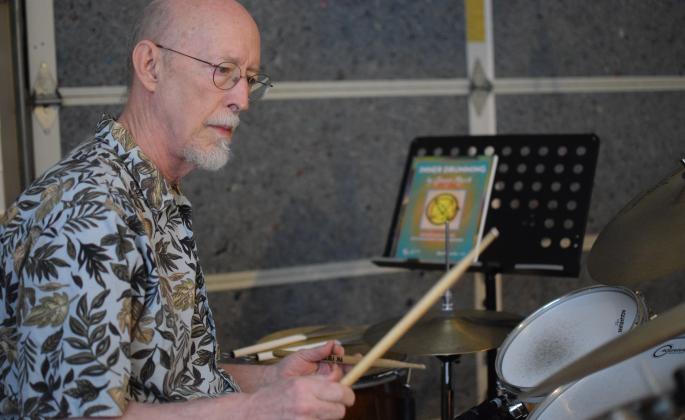 There are times when the music takes over a player, creating a seamless integration of human and instrument that makes the performance seem as natural as speaking. The magic of those moments is tough enough to describe — try learning it! But now Sonoma State University music professor and drum instructor George Marsh has designed a new way of reading, learning and internalizing that elusive “feel” of music in his new book, “Inner Drumming.”

A jazz drummer by training, Marsh has played with everyone from rock and roll pioneer Chuck Berry to legendary singer Barbara Streisand to Grateful Dead guitarist Jerry Garcia and countless others in his 60-year-career. He has been working on this book since 1984 and the updated version, released last year by publishing giant Sher Music, is more than just a book — it’s more like a philosophy of playing music.

"’Inner Drumming’ is dealing with how energy moves through your body to create the sounds you're going to be playing on the drum set,” he says. “It's not telling you to play any style."

This philosophy translates to other instruments as well. "Any instrumentalist of any kind is feeling the energy moving through their body to create sound. ‘Inner Drumming’ is the study of how to focus and work with this energy as it moves through all four limbs."

Let’s take a step back for a second.

Marsh was already an accomplished musician and teacher in the early ‘80s when a student, Bob Amacker, who was a Tai Chi instructor, encouraged Marsh to feel the energy in his body throughout each movement of his playing. Every kick of a big bass drum; the quick hits of the snare or ride cymbal; the foot pedal keeping time with the opening and closing of the hi-hat —the energy of each sound beginning as a movement of energy inside the drummer’s body.

Something about it clicked pretty quickly with him. “When you practice Tai Chi, you remove blockages in your body,” says Marsh. “You are connected to your mallet or your stick. When I saw this in my own playing back in 1980, it eventually got translated into ‘Inner Drumming.’ It allowed me to hear better. Tai Chi, as it applies to drumming, is helping you listen to your body. It helps you breathe from the lowest part of your body... and you become very strong.”

He adds, “This book is based upon the essence of Tai Chi. It's the study of the internal, strengthening the internal.”

The practice also alleviated physical issues common to drummers. “Like a lot of drummers, I was having problems like arms feeling too tight, or losing connection with the feet if I was playing with too much energy. I didn't want that — I wanted to make sure everything was connected. Tai chi is perfect for that.”

Marsh has even introduced the practice to his students at Sonoma State, bringing in a Tai Chi master for a three-hour class. “The students really connected with it,” he says.

The notation in the book looks like hieroglyphics to the uninitiated. Instead of bar lines and beat markers, “Inner Drumming” features four dots in the shape of a square representing right hand, left hand, right foot and left foot. Arrowed lines describe each exercise, to be taken at the student’s own tempo. It may be challenging for beginners, says Marsh, but most players will be able to understand it quickly, especially when using the accompanying DVD or videos on YouTube.

“It can be steady rhythm, pulsed, however you want,” says Marsh. “The point is that you are feeling how it's moving in your body.” The goal of the book is to provide examples of how to travel from limb to limb with all four limbs. The internalization, in combination with traditional music study, can lead to those magical moments where music seems to creates itself.

“When I'm playing with (‘Dawg’ music inventor and mandolinist) David Grisman or other people, or the jazz faculty at Sonoma State, the music brings feeling and emotion through me. The sounds that I play include those feelings and emotions. You've heard the phrase, 'The music plays itself when everything's good,' well this study helps that. You become fully aware of the sound that's coming out.”

Though he has created a new way of reading, playing and feeling music, Marsh, now in his 70s, is an eternal student. “I'm always learning,” he says. “You never keep music, it's always in the moment, and when you've played it, it's done. You can bring the information into it, but you can't get it and hold it. It is to be let free.”

The Commanders Jazz Ensemble from the United States Air Force Band of the Golden West are scheduled to land in Weill Hall at the Green Music Center Wednesday, Oct. 11 at 7:30 p.m. for a free concert with the Sonoma State University Jazz Orchestra as part of the 6th annual Jazz Week hosted by...