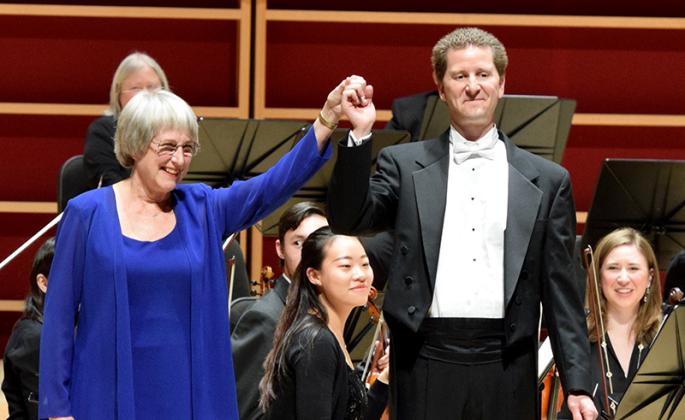 The inaugural performance of the Sonoma State University Symphony Orchestra on Dec. 11 brought a standing ovation for the orchestra, it's director Alexander Kahn and featured soloist and faculty pianist Marilyn Thompson.

The swirling strings of John Corigliano's "Invitation to the Voyage" began the evening, followed by the digital fireworks of Thompson's fingers on Mozart's Piano Concerto No. 20. After the intermission, the orchestra tackled Beethoven's Symphony No. 1, the first of what Kahn hopes will be a succession of the Romantic composer's nine symphonies as the orchestra builds in number and ability.

At the moment, the orchestra consists of just under 40 players, and is a mix of students and community members. It will grow to about 70 players as the semesters roll on.

"To have an student orchestra on the stage in Weill Hall, this is, in fact, an historic event," says Music Dept. Chair Brian Wilson.

The $165 million Green Music Center opened in 2012 after 14 years of fundraising and construction. It consists of the 1,400-seat Weill Hall (with the removable rear wall, opening to an additional 3,000 lawn seats), 250-seat Schroeder Hall, and Music Education Hall, made up of classrooms, practice spaces and faculty and administrative offices. In its first three years Weill Hall has already hosted stars of the classical and pop music worlds like Yo-Yo Ma, Lang Lang, Joshua Bell, Wynton Marsalis, Tony Bennett, Diana Ross and many others.

“I am still healing from those events because I’m human,” Richardson told a packed audience at the Sonoma...