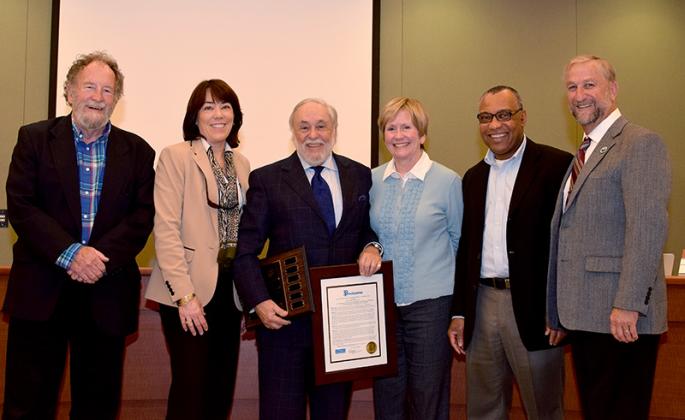 "When I arrived in Rohnert Park Sonoma State was pretty much just cement buildings," said Mayor Gina Belforte. "You've created this lush, inviting environment that's so open for learning. Congratulations and thank you for everything you've done for our community."

Echoing his fellow councilmembers' sentiments, vice-mayor Jake Mackenzie, a 30-year Rohnert Park resident who is in his 20th consecutive year on the city council, praised Armiñana's work on improving relations between the city and the university.

Among Armiñana's many accomplishments are the Jean and Charles Schulz Information Center, which includes a vast library open to the Rohnert Park community; renovation of Salazar Hall, which led to the opening of the Cotati-Rohnert Park Unified School District's Technology High School; the Osher Lifelong Learning Institute, providing a unique learning community for adults 50 and older; and the $165-million Green Music Center, which has become a cultural and performing arts hub in the North Bay Area.

"The Green Music Center is a jewel," said councilmember Pam Stafford. "We can't thank you enough for all you've brought to Rohnert Park."

The prestigious honor has also been bestowed upon Sonoma State music professor Lynne Morrow. The proclamation was passed unanimously at the March 22 City Council meeting. President Armiñana, who lives in Santa Rosa, is retiring in June.