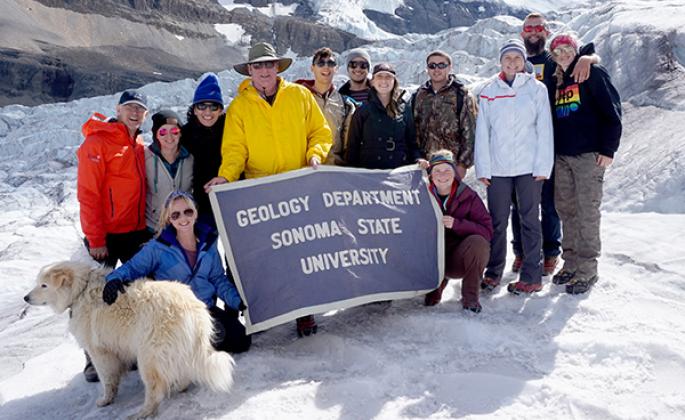 Professor Matthew James (in yellow) along with the Geology Department

From classroom to laboratory to spectacular field destinations, geologists are renown for innovation and educational excellence. Every location on Earth has an underlying geological story, and every geology field trip results in a demonstrable increase in each student's core competency, knowledge and confidence, pushing them to grow personally and professionally. On Aug. 19, 11 geology and earth science majors from Sonoma State University hopped off a boulder and jumped back in time by many thousands of years.

The students were traveling as part of a seven-day paleontology field trip to the Burgess Shale, the second collaboration between geology professor Matt James, a paleontologist, and geology department technician Phil Mooney, a structural geologist.

When they stepped onto the toe of the Athabasca Glacier high in the Canadian Rockies in Jasper National Park in Alberta, students left behind their familiar world of rock and soil to enter the world of snow and ice. The hard glacial ice under their crampons and hiking boots was actually ancient snow that fell thousands of years ago, having slowly compacted into ice over time from the overlying weight of subsequent yearly snowfalls, adding to the mass of the glacier. The original snow fell silently and the ice crystals expanded to form their interlocking solid matrix several miles uphill from where the geology students got their first taste, literally and figuratively, of glaciers and glacial geology.

Water melting off the glacier and running over the surface in numerous rivulets is perfectly safe to drink and refreshingly cold. The water is as pure, some would say, as driven snow. In the years when forest fires erupt in the nearby area, the glacial melt water takes on a smoky taste. Geology major Steven Adam Woodall said, "I enjoyed drinking this refreshing water straight from the runoff creeks while standing atop the glacier. At this moment I felt both proud and humbled." It was a global geological lesson from Canada's shrinking glaciers unfolded before them.

The Athabasca Glacier hike was their first full day in Canada, after an afternoon flight from San Francisco to Calgary in Alberta, then driving west into the night to reach British Columbia, some three hours away.

The students' padded parkas protected them against possible rain and certain wind. They hoisted backpacks stuffed with water and food to consume along the way during the six-hour hike. Everyone brings hats, sunscreen, and sunglasses for protection against the intense direct and reflected sunlight at high elevation. Looking more like the members of a Shackleton expedition to the South Pole, the geology majors were bundles of enthusiasm as they set off on a physically and intellectually rewarding part of their undergraduate education. "Hiking the glacier was like exploring a whole new planet," said student Eli Messinger.

We geologists hiked for six hours from the tourist-filled gravel parking lot to the upper reaches of the first icefall, far from the madding crowds and noises of civilization. The 13-person Sonoma State group followed single-file behind their experienced mountaineering guide, Peter Lemieux, and his faithful dog, George. Each step of the way they found themselves surrounded by the simple and beautiful elements of nature: blue sky, white ice, gray limestone mountains towering on all sides, scattered white clouds, and a brisk wind. They hungered for adventure and for knowledge.

Along the trail from the parking lot before reaching the ice, Peter Lemieux showed the group several "fingerprints" that glaciers leave behind, providing geologists with evidence of long ago activity, like detectives and crime scene investigators unearthing telltale clues and piecing together evidence of a crime. But this case wasn't a crime, but the natural phenomenon of glaciers forming, growing, sliding downhill under the pull of gravity, and eventually receding. Students were able to see firsthand, and lay their hands directly on, several of these diagnostic fingerprints.

One of the most noticeable features is a series of scratches in the bedrock caused by stones frozen into the very bottom of the glacier. As the glacier moves downhill, the stones scratch parallel lines, or glacial striations, into any rock in their way, like miniature furrows in a plowed field. The ice itself also polishes the bedrock while etching the striations, resulting in glacial polish--another clue.

The slow grinding action between ice and rock also results in very fine sediment, or glacial flour. When suspended in water, glacial flour gives lakes in the area an otherworldly emerald green color due to the refraction of light by the tiny particles.

The final pieces of glacial evidence, and perhaps the most noticeable even to the untrained eye, are massive piles of rock and dirt, sometimes hundreds of feet high. The ice bulldozed these glacial moraines at both the edges of the glacier and at the downhill toe of the glacier. Moraines resemble the material a bulldozer would pile up if a really huge bulldozer did its work and then left the scene without cleaning up the mess.

These glacial clues are textbook ideas, and the Athabasca provides excellent textbook examples to supplement what the students would otherwise just read about, or watch in a darkened classroom on a PowerPoint presentation. "My favorite hike was the Athabasca Glacier hike," said student Kaitlyn Fleming. "Our guide, Peter, made it fun, interesting, and very enjoyable. I feel like I learned so much from him. I also liked how he made a great effort to get to know each and every one of us."

Over time, the Athabasca ice, and that of all glaciers, flows inexorably downhill at a measurable pace that can only be described as, well, glacial. The Athabasca Glacier is noticeably shrinking in both total length and total thickness, something that I have seen first hand since my first annual trip to Canada with Sonoma State students in 2003. The glacier has retreated 1,300 feet horizontally, nearly a quarter of a mile, and become over 250 feet thinner vertically during those 12 years.

On this trip, the students were able to observe a graphic example of the annual thinning.

Back in the 1980s, Canadian researchers drilled several aluminum pipes from the surface through the glacier to the bedrock. Each summer hiking season when Lemieux and his other guides start their public hikes, they wrap green electrical tape around the poles right at the level of the ice. By the time our geology students arrive to hike in late August or early September, the green tape is 15 to 20 feet off the ice, showing the amount of melting, or ablation, that has occurred in just a few months.

The geology students reeled in surprise when they saw the firsthand the impact of global warming. Suddenly their classroom exercises and book learning fell into place as they stared skyward at the green tape.

The receding of glaciers worldwide is a pervasive, sustained, and accelerating global trend. Each year new winter snow falls, adding to the glacier's volume, but the overall story of the Athabasca confirms net summer shrinkage from melting, not of growth--the glacier is like a sugar cube out in the rain. The half-mile road from the highway to the parking lot where the glacier hike starts has prominent signs documenting the position of the toe of the glacier in 10-year increments going back to the late 19th century. Photographs taken from the exact same vantage point high on a hill opposite the glacier for nearly 100 years provide some of the most incontrovertible evidence of the shrinking of the Athabasca Glacier.

Not only is the glacier physically shrinking, but it also contains air bubbles trapped in the ice that provide actual data on the amount of CO2 in the atmosphere of the past. The geology students broke off chunks of ice, popped them into their mouths and joked about enjoying "the ancient air" as they chewed on the ice.

Tracking glacier history is an archetypical example of "awe-inspiring" practical education and undergraduate student engagement. Whenever geologists hear about "hands on" education, we immediately also think about "boots on" education. Our guiding philosophy extends back to Aristotle, who wrote, "We are what we repeatedly do. Excellence, then, is not an act, but a habit."

The grandeur and scope of the mighty glacier embedded in the Canadian Rockies serves as a highly relevant, hands-on outdoor classroom, teaching geology majors more in six hours than they could learn in six weeks in the confines of Darwin Hall on the university campus. On the Canada trip students found themselves immersed in the hydrosphere, the lithosphere, and the atmosphere; for geologists, the entire world is our outdoor classroom.

For most students, this weeklong trip to Canada is their only international field trip during their undergraduate education. When students travel internationally, even if just to Canada, it provides a unique educational innovation. "Having the opportunity to travel internationally meant a lot to me," said geology major Brandon Carroll. "Meeting, networking, and learning from experts in the fields of geology, paleontology and glaciology made the trip particularly memorable."