Barksdale becomes the 10th athletic director in the history of SSU
January 26, 2018 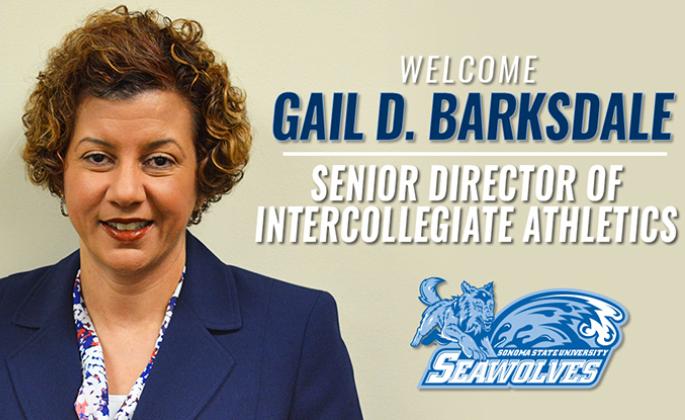 Barksdale becomes the 10th athletic director in the history of Sonoma State, and follows the 20-year tenure of Bill Fusco, who retired in October.

Barksdale was selected following a national search. She will be the first woman Director of Athletics since the university’s men’s and women’s operations were combined in 1981.

“She brings a breadth of experience and leadership that will strengthen our Athletic programs and allow our student-athletes to excel on the playing fields and in the classroom. I’m very proud of the over 300 student-athletes and 14 teams (5 men’s, 9 women’s) that make up our Division II athletics program. Sonoma State Athletics has a tradition of excellence, with three national championships and numerous regional and conference championships, and I know Gail will continue our tradition of preparing competitive Seawolves who are also stellar students.”

Incoming Senior Athletics Director Barksdale said: “I am honored to be joining the Seawolves family and would like to thank President Sakaki, Vice President Lopes and the members of the search committee for their confidence in my ability to lead this great team. Sonoma State University's values and tradition of excellence in both academics and athletics make this a tremendous opportunity and I look forward to working with the student-athletes, coaches and staff who have created this strong foundation.”

Shannon Percell, who has served as the Interim Senior Director of Athletics since Fusco’s retirement, will return to her position as Associate Athletics Director and Senior Women’s Administrator within the department.

Barksdale comes to Sonoma State from Indiana University-Purdue University Indianapolis (IUPUI), a NCAA Division I institution, where she has spent the past seven years in a variety of roles, but most recently the Deputy Director of Athletics since 2014.  She oversaw IUPUI’s internal operations, including several administrative units and athletic teams.  In addition to serving as a member of the Department of Athletics' senior management team, she also served as the Senior Woman Administrator to the NCAA and Horizon League.

Prior to joining the IUPUI Athletics staff, Barksdale spent three years at Georgia State University and was responsible for overseeing the administrative and operational activities for several athletic teams. She also provided mentorship and supervision to the student-athlete development, sports medicine and strength and conditioning administrative units.