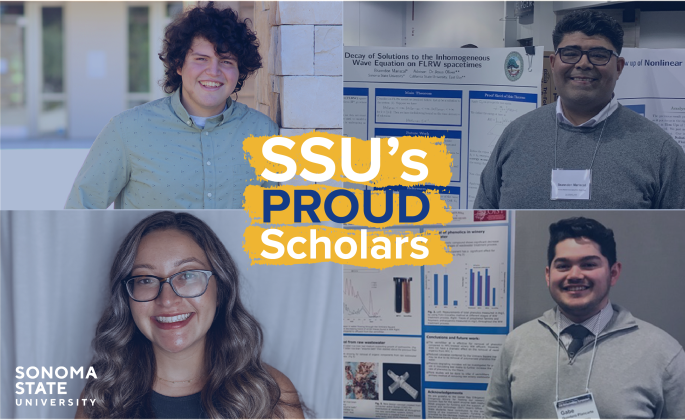 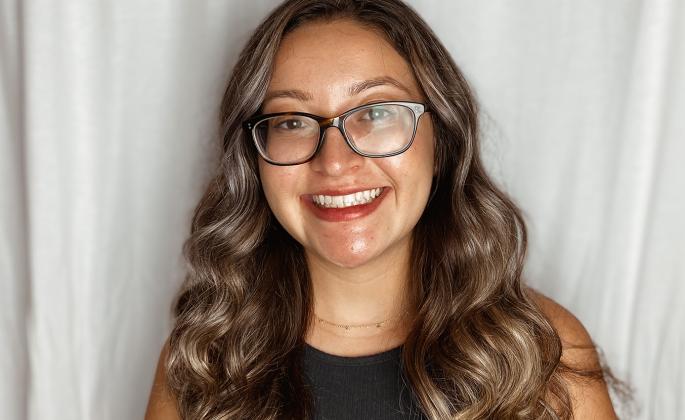 Born and raised in El Salvador, Frida Pereira Palencia graduated from Sonoma State with a 3.7 GPA in Biology and was on the Dean’s List throughout her four years. Currently, she is working on getting EMT certified while completing her application for physician assistant school. 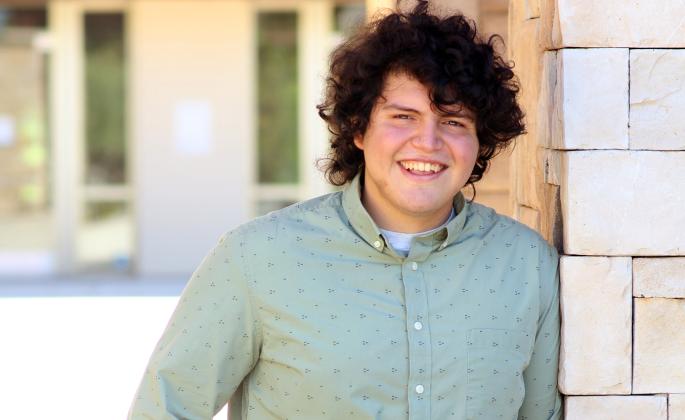 The son of two Mexican immigrants, Fabian Ramirez aspires to earn a Ph.D. in pure mathematics and become a research professor so that he can inspire the next generation of mathematicians. 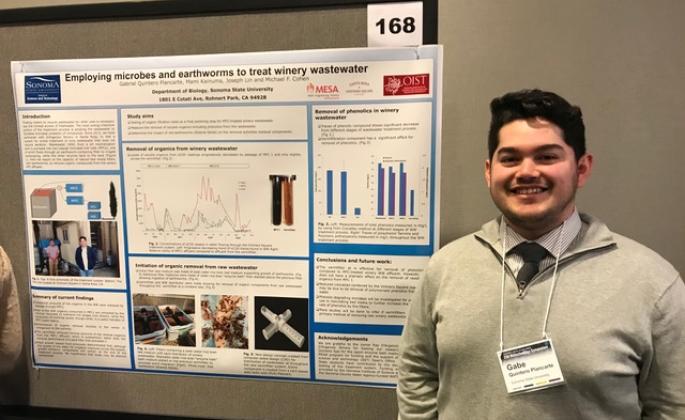 Gabriel Quintero Plancarte came to the U.S. at the age of one and found mathematics and science provided a universal language he could understand, which gave him a sense of confidence in school. 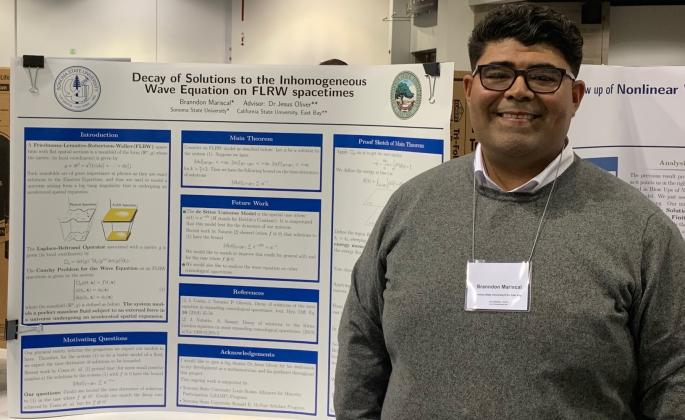 Branndon Mariscal credits the strong support from the LSAMP program at Sonoma State with helping him finally achieve his dream of completing a bachelor's degree in math. He is now a math Ph.D. student at UC Riverside with an interest in mathematical physics.

Funded by the National Science Foundation and the Chancellor's Office of the California State University, the CSU-LSAMP Alliance is a coordinated and comprehensive program dedicated to broadening STEM participation. Each year, the CSU-LSAMP coordinators at each alliance campus nominate students to be recognized through the Program Recognizing Outstanding Undergraduate Distinction (PROUD). PROUD scholars have distinguished themselves in so many ways - in the classroom, in the laboratory, and in the community - and the success of CSU-LSAMP is truly written in their stories. In the latest CSU-LSAMP PROUD Publication, there are four PROUD recipient Sonoma State students and alumni who showcase their incredible potential for success, despite past and current challenging times. Below are bios for each student alongside a distinction, all of which were featured in the CSU-LSAMP PROUD publication.

Frida was born and raised in El Salvador in a single-parent household. After many personal-safety threatening events, she and her immediate family moved to the United States, seeking political asylum. At the age of 10, Frida and her family were forced to start a new life from scratch in a foreign country, with no previous knowledge of the people or language. Throughout primary and secondary school, Frida’s family struggled with financial hardships. After her very first routine health checkup, Frida knew that she wanted to study medicine. In spite of her life-changing relocation, her passion for learning, helping others, and medical science remained, giving her the strength needed to overcome any difficulties she encountered as a first-generation minority student trying to realize her dreams.

Frida graduated from Sonoma State with a 3.7 GPA in Biology and was on the Dean’s List throughout her four years. At Sonoma State, she was actively involved with JUMP (Join Us Making Progress), the biology club, and the pre-health professions club. She was a MESA tutor, mentor, and honors program student. During her junior year, Frida studied abroad at the Queensland University of Technology in Brisbane, Australia. During this year, she backpacked around Australia and neighboring countries, making lifelong friends, memories, and worldly discoveries while still keeping up with her studies. While in Australia, she also volunteered at a non-profit organization for victims and survivors of domestic violence. Frida has also worked as an emergency room scribe at Santa Rosa Memorial Hospital, where she discovered a new, profound love for emergency medicine. Currently, she is working on getting EMT certified while completing her application for physician assistant school. Frida will use this title to advocate for health equity and bring high-quality medical care to her community, and to stand against discrimination within our healthcare system.

Growing up, Fabian Ramirez never considered himself a math person. He did not have a way with numbers like Gauss. Nor did he have an intuition for geometry like Archimedes. Instead, as the son of two Mexican immigrants, he only knew the life of a working-class family who took low-paying, labor-intensive jobs to make a living in America. However, stumbling across the story of Fermat’s Last Theorem, Fabian learned a valuable lesson: passion and persistence are more important than natural aptitude for a mathematician. Driven by this realization, Fabian attended Santa Rosa Junior College, where he earned an Associate degree in mathematics and was awarded a department award for his “outstanding potential” in mathematics. Not wanting to waste this potential, Fabian continued his undergraduate studies at Sonoma State University, where he quickly joined MESA, the McNair Scholars Program, LSAMP, and the Mathematical Epidemiology Research Group (MERG). As a member of MERG, Fabian worked under Dr. Omayra Ortega to mathematically determine the relationship between measles and vaccination rates. This resulted in a Best Poster Award at the Sonoma State Science Symposium, a publication in the McNair Scholars Journal, and poster presentations at national conferences. Eager to make the transition to pure mathematics, Fabian participated in the 2020 MSRI-UP program, where under the tutelage of Dr. Edray Goins and Dr. Alex Barrios, Fabian worked with two other undergraduates to compute the monodromy groups of the classical modular curves. Still not satisfied, Fabian has continued his work from MSRI with Dr. Alex Barrios; meanwhile, Fabian is in the early stages of working on a project with Dr. Natalie Hobson at Sonoma State. Ultimately, Fabian aspires to earn a Ph.D. in pure mathematics and become a research professor so that he can inspire the next generation of mathematicians.

Gabriel Quintero Plancarte is a Biology major with a concentration in Molecular and Cellular Biology. He was born in Ario de Rayón, Michoacán, and came to the United States with his mother at the age of one. During his early years as a child learning English at school and Spanish at home simultaneously, he often struggled in school. Often feeling discouraged, he spent most of his free time as a child in supplemental programs and in after school tutoring in order to catch up and feel a sense of belonging with his peers. During that time, he noticed that the subjects that were easiest for him were mathematics and science. He felt as if those subjects possessed a universal language he could understand and that gave him a sense of confidence.

Gabriel is currently the Treasurer for SACNAS Seawolves, A Supplemental Instructor (SI) for the Learning Academic Resource Center (LARC) & SI program, a MESA student mentor, and a McNair’s Scholar. He is also working with Dr. Michael F. Cohen using a sequential microbial fuel cell-vermifilter system to test the water quality from various steps of the treatment process by using assays for total organics, phenolic compounds, and suitability for use in irrigation of various greenhouse-cultivated plants. This project has been presented at various conferences, such as the Sonoma State Science Symposium, CSUPERB, and McNair’s Virtual Research Conference, and has been awarded the Ongaro Family Green Science main prize.

Looking back, Gabriel feels a sense of accomplishment with becoming the first in his family to graduate with a college degree.  He plans to continue his studies and pursue a Master’s in Microbial Genetics or in Molecular Cellular and Developmental Biology.

In his senior year of high school, Branndon applied to several colleges but was rejected from every single one. Since no one else in his family has gone to college, he thought there was no pathway to higher education. A year after graduating from high school, barely scraping by to pay bills, he was convinced that he had to get an education to get a good-paying job. He started at a community college and took a double full-time course load — since he was placed into remedial math and English, this was the fastest way to meet the prerequisites to transfer to a four-year college. Right before applying for transfer, tragedy struck and several members of his family were deported. In addition, he had started a family of his own. He took time off from school to gain some financial stability. He kept studying on his own while working sixty-hour weeks, and he realized that his passion was mathematics. He channeled all of his energy into this field by studying advanced books and reading research papers on his own. His hard work did not go unnoticed. He was invited to participate in several mathematics research internships. That experience gave him a great foundation from which to apply to university as a transfer, and he was accepted at Sonoma State University. Branndon initially struggled to make the transition — he moved over 500 miles away from home with his family, he worked full time while taking a full-time upper-division course load, and he continued to do research in mathematics. He credits the strong support from the LSAMP program at Sonoma State with helping him finally achieve his dream of completing a bachelor's degree in math. Branndon is now a math Ph.D. student at UC Riverside with an interest in mathematical physics.

Graduate research is hard enough, but imagine condensing it into an engaging presentation for a panel of judges — in no more than three minutes. That was the premise for...