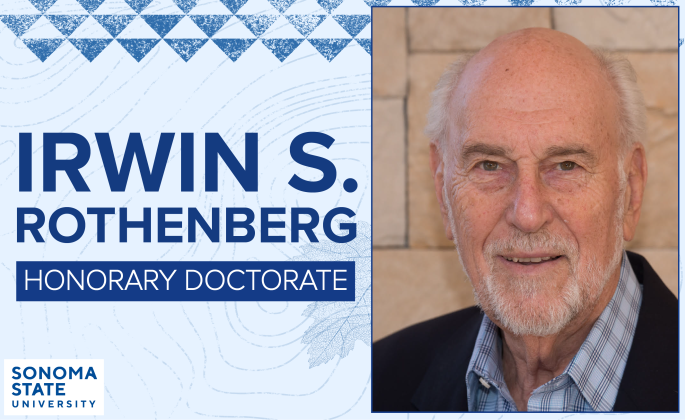 Rothenberg’s degree will be conferred as part of the School of Business and Economics ceremony on Saturday, May 22, at noon. Sonoma State University’s commencement will be a hybrid drive-thru, in which graduates will experience the time-honored tradition of being recognized for their achievement as they cross the stage, with family and friends there to celebrate. The Class of 2021 Commencement ceremonies will be held throughout the weekend of May 22-23.

“Mr. Rothenberg has been a respected community leader and ambassador of Sonoma State for decades,” said President Judy K. Sakaki. “His passion for building a culture of generosity and service throughout the North Bay community has been felt by many organizations. We have been extremely fortunate to have Irv’s contributions to SSU thus far, and he’s more than deserving of this recognition.”

Mr. Rothenberg founded Wealth Management Consultants, LLC in Santa Rosa in 1995, which later merged with Buckingham Strategic Wealth in 2010. With more than 40 years in financial advising, Mr. Rothenberg’s success as an accomplished businessman and philanthropist is attributed to building relationships, his clientele spanning decades as he served generations of North Bay families.

In particular, he has been an ambassador of Sonoma State for more than 20 years and given generously of his time and resources. Mr. Rothenberg has served on the Green Music Center Board of Advisors, where he played an integral role in the planning and fundraising efforts to build a premier music venue in Sonoma County. His work with the Green Music Center has enhanced the campus, its students, and the greater community by providing access to diverse artistic experiences that educate, connect, and inspire the North Bay communities. He currently serves on the SSU Foundation Board and the California State University Investment Advisory Committee.

Mr. Rothenberg received his Bachelor of Science in Accountancy from George Washington University in Washington D.C. Given his work as a financial specialist, he was awarded the American Institute of Certified Public Accountants Personal Financial Planning Distinguished Service Award. He also was one of the first CPAs in the United States to obtain the professional designation of Personal Financial Specialist granted by the American Institute of Certified Public Accountants (AICPA).

He was nominated for this degree by Sonoma State to recognize his leadership to Sonoma County and his advocacy, advice, and support for the university. The Board of Trustees of the California State University selected Mr. Rothenberg to receive an honorary degree of Doctor of Humane Letters.