The Fear of Not Flying 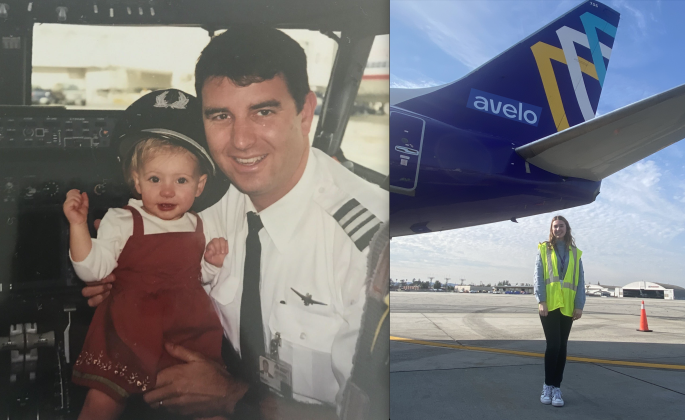 Aviation has always been a part of Molly Oates' life 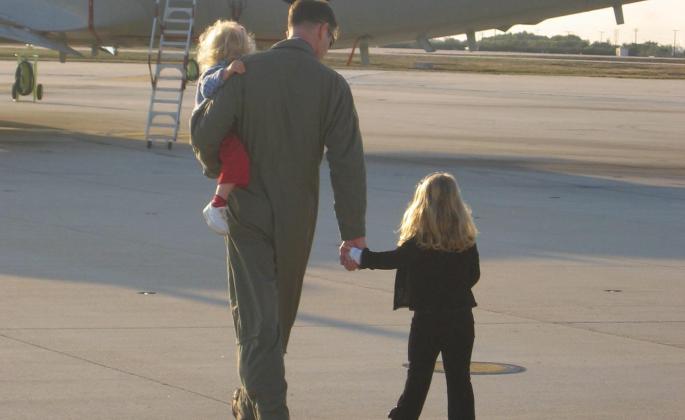 Molly Oates grew up in an aviation family. 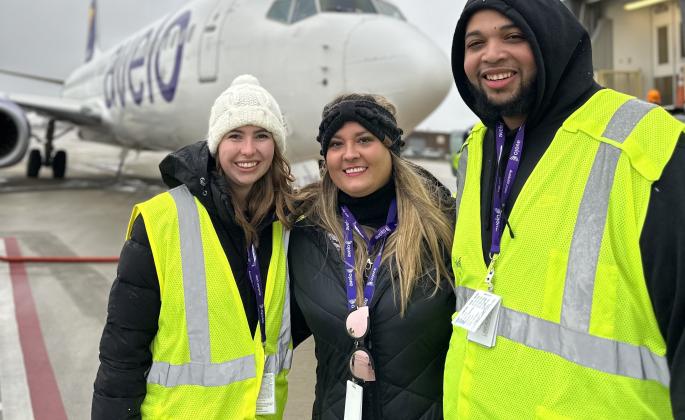 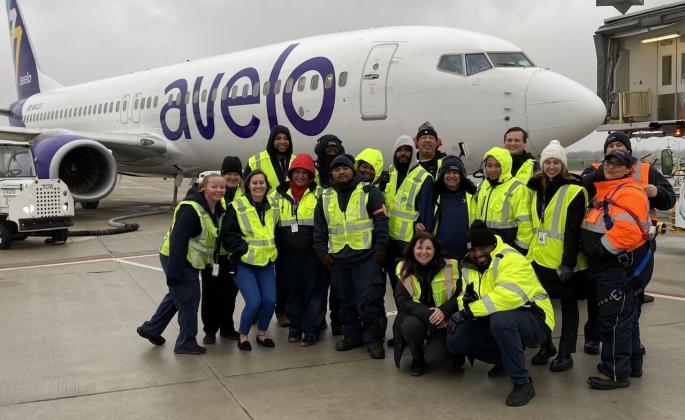 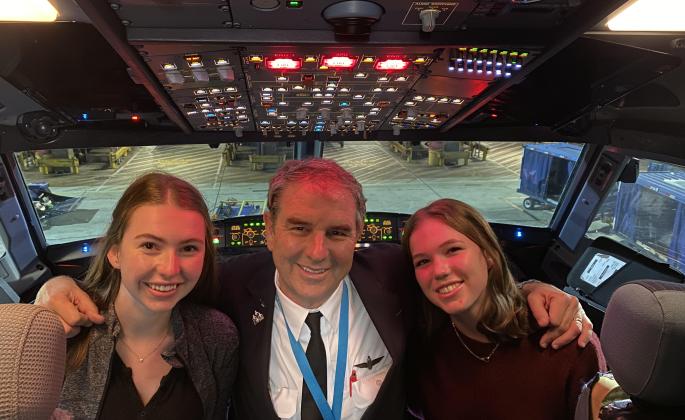 Molly Oates (left) has a fear of not flying.

Long before Molly Oates learned to walk or even talk, she already knew she could fly.

That’s because Molly’s father was a pilot – for the Navy and also for American Airlines. Both of her grandfathers and her uncles were pilots, too, making aviation culture the foundational aspect of her family upbringing. But when it came time for choosing a college and career path, Molly figured that since most CSU schools don’t offer aviation programs as majors, it seemed obvious that her jet-setting interest best be categorized as a family hobby. However, an unplanned transfer from a teaching credential to a Global Studies major at Sonoma State set an entire new life course for Molly. It was while fulfilling an internship requirement at SSU when Molly reached out to a few airlines requesting meetings to discuss career options in aviation. These days, Molly is a Training Specialist in Airport Operations with Avelo Airlines – an ultra-affordable U.S. carrier which took flight in 2021 and is making national headlines for its quickly expanding services to often overlooked destinations, such as Santa Rosa, Dayton, Ohio and Redmond, Washington, to name a few.

“Molly distinguished herself in a big way during her bachelor’s thesis by doing what Global Studies students do best: exploring a complex real-world problem from multiple angles. She even brought her German language skills to the table doing interviews with people in Germany affected by the issues. You could always see the mental wheels turning as Molly tackled big challenges,” said John H. Nardine, a lecturer in SSU’s department of Global Studies.

We caught up with Molly just as her career is taking off to new heights.

What’s your earliest memory of being on an airplane?

I just found a picture the other day of me when I was probably six months old sitting on my dad's lap. I’m there wearing his captain’s hat. I mean, I don't remember it, but that's probably one of the earliest pictures we have. I always remember my dad coming home from a work trip in his uniform and holding me.  That led me to want to travel whenever I could. When I was in middle school, my dad would have a trip and he’d say, ‘Hey, I'm going to Indiana for the day, wanna come grab lunch with me?’ I flew the route with him to Indiana, grabbed lunch and flew back. I'd always take any opportunity that I could get to travel, especially when he was flying.

What is it about traveling that moves you?

When I was 15, I went on an exchange program for airline families to Australia and then to Spain when I was 16. Experiencing these two completely different cultures – living with a family and understanding and respecting what their culture is like gave me a newfound love for travel and everything international. These experiences were truly eye-opening, turning points for me. It made me always want to strive to see more – to understand a different culture more – and get to know people better and the politics of other countries.

What led you to study at Sonoma State?

For college I knew I wanted to go somewhere else and see a different part of California. I knew I wanted to attend a Cal State school. My dad's a veteran and we’re on the Veteran Waiver program. I went on a tour of Sonoma State during my sophomore year of high school and instantly fell in love. My grandparents are from Sacramento and so I was somewhat familiar with the general area, but Sonoma County wasn’t on my radar. I remember driving down East Cotati Avenue, turning onto the main entrance and being mesmerized by those big beautiful redwood trees. I love how it felt a little bit country, but still close to the city. SSU was the first school I ever toured, and I knew immediately that that was where I wanted to go. I had my site set on the SSU and never really let it go.

Were you as certain about what you wanted to study at the time?

In high school, I thought I wanted to be a teacher. SSU has a great teaching credential program that drew me in initially, but during my general ed, I took some courses in GEP and absolutely fell in love with that. I've always liked sustainability, and being able to take these courses that allowed me to explore the other interests that I didn't think I'd be able to explore. At the end of freshman year, I realized I knew I wanted to do something with a mixture of international relations and sustainability. I found the Global Studies program and immediately picked that up. I realized that this was more the path I wanted to go down.

Do you have a favorite class or teacher?

That's a tough one. Probably John Nardine. I had him for professional development. That class really prepared you for the professional world – with your resume, how to do an elevator pitch and all of the important things that sometimes get glossed over in the academia world that you need to be successful in your career and to get a job after college. It was a lot of hard work and felt extremely prepared for the real world. John was an incredible motivator and support system. He is always willing to listen, always wants to hear your opinions and how you see things, but then can also give critical advice that could help shape who you are in school and in the world. I work with him on the Model UN Club and he has been such a source of information and really a guiding factor in what I ended up doing for a career.

I lived on campus my freshman year. Sophomore year was when Covid hit, so we had to move out and then I returned again and lived on campus for my senior year. The Student Center and the Green Music Center were my two favorite study spots. I absolutely love the openness of the GMC – sitting in the gorgeous grass having a quiet study spot away from it all. But then I absolutely love the Student Center with the fireplace and couches.  I've met so many different people there too, sitting and working. It’s a really great networking spot as well as just being able to watch everybody coming in and out and just meet other people there too.

What non-academic memory comes to mind?

Last year in August, the Beach Boys came to the GMC and I have been a Beach Boys fan my whole life. I grew up listening to that music as an integral part of my childhood. And so being able to actually get to see them in person and right up close was amazing. I was in the SSU German program as well, and took three of our German exchange students to the concert with me and seeing them actually understanding the music and singing along, that was amazing to see as well too. It’s not just California music. Everybody from around the world knows the Beach Boys and that was so cool.

Please tell us about Avelo Airlines. How would you describe the Avelo personality?

We started in the middle of the pandemic. I’d describe the Avelo personality as people oriented with a strong focus on customer service, being friendly, helpful, and always having a smile on our face. My mom, when she flew us for the first time, described it as what Southwest Airlines used to be. Avelo likes to focus on underserved communities that don't have traditional airline services. Somebody traveling our Arcata route, normally would have to travel down to Santa Rosa from Arcata to catch a flight to Burbank. Well now they have direct service. They don't have to worry about doing that four or five-hour drive anymore. One of our mottos is ‘One Crew.’ We believe that we all work together. That is, we are all one. Whether you're an in-flight, whether you are ground service, we all work together and we all look out for each other. The relationships that we have built, whether the ramp crew at Santa Rosa, our pilots, flight attendants – we're all friends, we all hang out together. It's truly one family and I think that comes across to our customers as well too.

I started out as the ground handler for Avelo, working through Sonoma Jet Center. A ground handler does everything from coordinating fueling, running the ticket counter operations, gate operations, ramp technicians, basically everything that involves your airline experience from the moment you check in until you are taxiing out for takeoff. You do it all.  And yes, I got to wear those cool headsets, communicating to the pilots from the ground. It was such an incredible opportunity to pursue my love of aviation while still in school.

What’s your current job and what do you enjoy most about working in the airline industry?

I just got a new job as a Training Specialist in Airport Operations. I am currently based out of Orlando, Fla. I love getting to see the expansion of the company and being able to be a part of training new crewmembers, passing along our excitement for the job, the airline, our beliefs in the company and welcoming them to the Avelo family.

If you could spend an afternoon or a day with Lobo, the mascot, what would you do? Would you take Lobo on a flight?

That would be pretty cool to spend a day with Lobo! I would probably start off grabbing lunch at Lobo’s because they have great pizza. Then I will probably take him to the club plane at Sonoma Jet Center. If you have your pilot's license you can use it.  It would be really fun to take Lobo up in the Cheetah and fly around Bodega Bay and do a Bay tour and then fly over campus and around Sonoma County. You can really gain a new appreciation for Sonoma County from the sky!