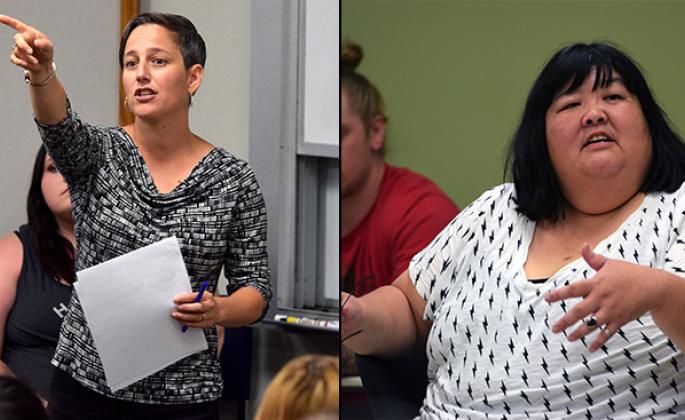 Each year the University honors at least one faculty member who has made outstanding contributions to the education of Sonoma State students through classroom instruction and other activities that promote student learning. Any member of the instructional, library or student affairs faculty, or any administrator or staff member who teaches credit-bearing courses may be nominated by anyone in the SSU campus community. Nominations are reviewed by a selection committee on the Academic Senate.

Women's and Gender Studies Professor Lena McQuade excels at the challenge of facilitating transformational class discussions every day about the highly charged topics of gender, race and class. Her courses often use popular culture and current events as a starting point to engage students in academically rigorous investigations of deeper historical and socio-political contexts that shape people's lives. Through dynamic classroom activities, McQuade fosters a scholarly community and works to weave a range of student voices into the larger conversations within the field of Women's and Gender Studies.

"There is a very human part to teaching that is about reading the room and meeting students right where they are," says McQuade. "If students are hesitant about being in a WGS class, I want to start right there and work with them to develop language and formulate questions so that they can have a deeper engagement with the world around them."

In her eight years at Sonoma State, McQuade has invited speakers from the community to the Gender Studies Lecture Series, a popular class with more than 120 students enrolled each offering that is also open to the public. McQuade has also received a community engaged teaching award for her work with the annual Power of Know Conference, which pairs SSU students as mentors to underserved tween girls from local nonprofit Circle of Sisters. McQuade is an SSU alumna who double majored in Women's and Gender Studies and the Hutchins School of Liberal Studies. She holds a Ph.D. and M.A. in American Studies and a Graduate Certificate in Women's Studies from the University of New Mexico.

Kinesiology Professor Lauren Morimoto is passionate about education, about helping people live in their own bodies better, and about inclusion, diversity and creating an environment where every member of the Sonoma State community feels safe and welcomed. The three-time Excellence in Teaching Award nominee has been Director of Diversity and Inclusive Excellence since 2013, and since 2014 she has helped advance the LGBT+ Safe Zone and Undocu-ally trainings for faculty and staff. She encourages looking at the world through different viewpoints, and brings this into her coursework with classes like "Ethics, Inclusion and Equity in Coaching," and "Women in Sport: Issues, Images and Identities." She also co-developed and oversaw the implementation of the department's Coach Education Emphasis at SSU.

"I want students to care about the people they're working with," says Morimoto. "I always tell them, you're not working on bodies, you're working on people, so you can't just treat everybody like they have the same background."

Her teaching philosophy revolves around three central points: Fostering student engagement with course content; encouraging student engagement with each other and the professor; and promoting student engagement outside the classroom. What she's teaching will not matter to students, she says, until she can demonstrate to students that they matter to her. Dr. Morimoto joined the full-time faculty at Sonoma State in 2009 after holding positions as a lecturer at CSU East Bay and visiting assistant professor at Miami University of Ohio. She holds a Ph.D. of philosophy in educational policy and leadership as well as an M.A. in education from Ohio State. Her undergraduate degrees in dramatic arts and history are from UC Berkeley.

Sonoma State University’s Sports and Social Justice lecture series explores gender, race and society with lectures about track stars Wilma Rudolph and Dr. Tommie Smith, both of whom shattered stereotypes and paved the way for future generations. “Both of these talks cut across wide...