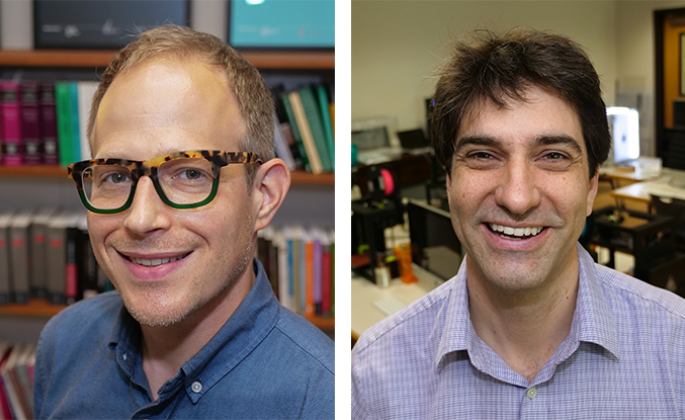 Each year the University honors at least one faculty member who has made outstanding contributions to the education of Sonoma State students through classroom instruction and other activities that promote student learning. Any member of the instructional, library or student affairs faculty, or any administrator or staff member who teaches credit-bearing courses may be nominated by anyone in the SSU campus community. Nominations are reviewed by a selection committee on the Academic Senate.

The goal of Dr. Samuel Cohen's teaching is for students to leave the classroom with a greater appreciation for the complexity and diversity of human history and the ability to critically question what others claim to be right and wrong. To empower students, Dr. Cohen encourages curiosity and strives to create an active dialogue between student and professor through question-driven discussions and historical inquiry.

"History is great at making students realize that we shouldn't take things for granted," says Cohen, "that ideas and institutions come from somewhere, and maybe that means they're not eternal in that sense but are flexible and created by humans in a historical context."

Dr. Cohen’s down-to-earth style puts students at ease and he often incorporates pop culture into his lectures to spark discussion and debate, whether it's celebrating his Toronto heritage with a photo of Drake, or dismissing "Ancient Aliens" television programs in a lesson on verifying historical sources. By highlighting the recognizable he believes students can better retain unfamiliar information and ideas, analyze the ancient world in its own context and question easy comparisons between the present and past. To fill gaps in written historical records, he has even brought ancient Roman coins to class to illustrate a touchable moment in time.

Outside the classroom, Dr. Cohen serves as coordinator of the department's internship program and enjoys taking extra time to help students improve their writing skills.

Physics and Astronomy Professor Dr. Jeremy Qualls is an interdisciplinary collaborator. He routinely goes out of his way to meet students and faculty at their level to get buy-in for a project or assignment, and the results can be felt throughout campus. Using this approach, he took the lead in securing a nearly $600,000 NSF grant to design and implement a new Maker program and corresponding Makerspace on campus which opened in fall 2017 for all students, faculty and staff to use free of charge.

This came on the heels of another successful NSF grant for Science 120, an immersive, two-semester first-year course for 12 units of GE credit. The multi-disciplinary, hands-on course showed improved recruitment and retention in STEM majors. This, as well as the new Maker program, is an example of his philosophy of empowering students to believe in themselves and challenge their own expectations. He strives to open minds and encourage lifelong learning.

"It's important to empower students to feel like this is something they can do and they’re comfortable with, otherwise they won't use it," says Qualls.

Some of his favorite classes have been Physics of Toys and Physics of Martial Arts, both of which are immersive courses designed to engage students in physics.

Dr. Qualls is also the Director of Academic Resources and Planning for the School of Science and Technology, and was the STEM Freshman Year Experience director from 2012 to 2016.