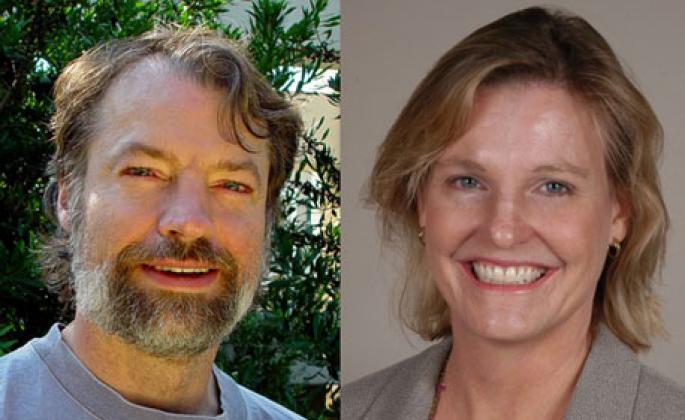 Dr. Heather Smith (Psychology) and Dr. Nathan Rank (Biology) have been named recipients of the 2012 Goldstein Award for Excellence in Scholarship in recognition of their outstanding scholarship and research.

Both have made significant contributions to their areas of expertise and to the local community and campus through their teaching, research publishing, various awards, grants, and fellowships received and seminars and lectures. They also have offered their students outstanding training opportunities and will receive funds to further their research in their respective fields.

Heather Smith's research focuses primarily on the power of a shared group identity, the interpretation of authority behavior, and the influence of emotions on behavioral reactions to injustice.

She has more than 32 published articles in the field of social psychology, and other psychologists have cited her work in their own research publications over 300 times. In addition, she has been an associate and consulting editor for three different major psychology journals.

In a field that is growing increasingly more competitive, Smith proves that relentless hard work pays off. She has been awarded federal grants and fellowships for her research dating back to 1986.

She is both nationally and internationally recognized for her work in social justice and continues to work with students and research colleagues in England, Massachusetts, Kansas and California.

Most importantly, Smith uses her knowledge and training in social psychology to work closely with undergraduate students on various research projects. Almost all of her publications include her students as co-authors, and several of her former students have obtained doctoral degrees in psychology, including one from the University of Kansas, which has one of the country's top psychology programs.

Since beginning her teaching career at SSU, she has co-published and co-presented with, as well mentored, about 80 SSU undergraduates. Dr. Smith's true passion lies in giving her students a chance to conduct and produce their own research while helping her with her larger research projects.

Her current research concerns what prompts victims to challenge injustice and why. She is working on six projects in collaboration with SSU students regarding this issue. Her research projects include an examination of observers' reactions to victims who forgive a partner's infidelity and to older patient's reactions to visiting the doctor.

In her most recent research project, Dr. Smith and her students find that young women who report more demographically diverse close friends are less likely to report feeling envious following physical appearance comparisons to strangers in comparison to the feelings of young women who report more demographically similar close friends.

Dr. Smith plans to use her award money to purchase a new computer for her undergraduate research group.

Dr. Nathan Rank has written more than 32 publications in the field of evolutionary ecology and genetics as well as generated 13 grants during his time at SSU.

His interest in evolution and genetics made him a prime candidate to become a professor of biology at SSU in 1995 - so much so that the department flew him in for an interview from Switzerland where he had been conducting his post-doctoral research.

Ever since then Rank has managed to balance conducting his own research while simultaneously teaching and mentoring his students. He has supervised 50 undergraduates and 13 graduates during his time at SSU. Results of this work have been published in 19 peer-reviewed journal articles, including one in the Proceedings of the National Academy of Sciences.

In spite of the fact that Rank's career at a teacher began much later than his career as a researcher and scientist, he has made his main focus sharing his intellect with those who want to learn.

He makes himself available to all his students at SSU who want to pursue careers and research in biology as well as to those in the community who want to learn about biology.

He served as the director of Fairfield Osborne Preserve from 2000-2009 where he helped his students interest younger generations in the curiosities of biology on a very local and pertinent level. He is accredited with developing the Entomology Outreach Program, which puts on the ever fascinating annual Insecta Palooza at SSU.

Rank has also been awarded $1.4 million for the National Science Foundation to support educational programs and to fund new equipment for the School of Science and Technology. Awards from the NSF are extremely difficult to obtain and less than 20 percent of research proposals are funded.

As well as serving on numerous subcommittees at SSU, Rank became the biology department's chair in 2011. He hopes to raise awareness of the department's continued to service to community education.

With this award he plans on returning to Europe to finish research started here with his students on beetle populations in the Sierra Nevada's and to work with other colleagues and graduate students there.

The Goldstein Awards for Excellence in Scholarship honors faculty with a strong commitment to the teacher-scholar model. It recognizes the important connection between faculty professional development and enriched learning environments for students. Each recipient will receive $1,500 to support their ongoing scholarship efforts.

Sonoma State University Professors Karin Enstam Jaffe and Patrick Jackson are the recipients of the 2015-2016 President's Excellence in Scholarship award. The award honors faculty for their outstanding scholarship, commitment to student participation in research, and their creative approaches...

"It's a tremendous honor to be recognized by peers, colleagues, and associates," said Thach. "I spent years as an executive at...

Wandling sees the high school dropout rate as an epidemic, and has...