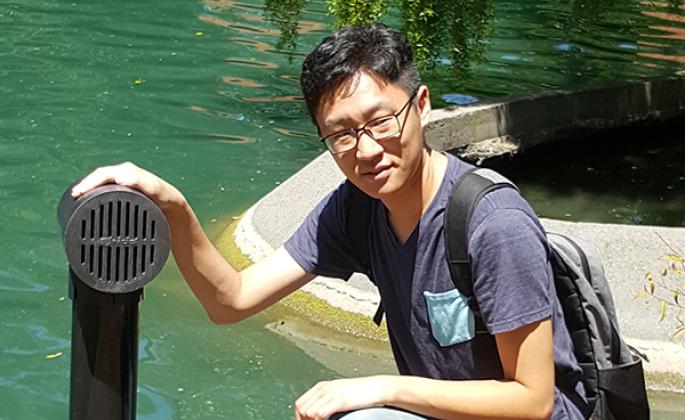 "Many developers and city officials from Texas were interested in our project, especially following the recent floods in that state," says Feng, referring to torrential rains at the beginning of June responsible for the death of at least 20 people in Texas and Louisiana and more than $1 billion in damage to Houston alone. "We received a lot of good feedback to improve the system."

The feedback is important to Feng, who is currently working with a unit on the base of Sonoma Mountain. Right now, the unit is equipped with sensors to measure water level, temperature, wind speed, barometric pressure and other conditions. That data is sent wirelessly to a server at Sonoma State. There is also the possibility of sending messages directly to email or social media to quickly alert citizens and government officials.

Another perk of this project is the price--each unit cost less than $100 to make, says the project's faculty advisor, Sonoma State Engineering Science Professor Farid Farahmand. "You can have a bunch of them and get very good data," he says. "Rather than having one large, expensive unit that may or may not work, you can have 50 of these throughout the city." The units are small and inconspicuous enough to be placed in a variety of locations.

The Global City Teams Challenge is a conference funded in part by the National Institute of Standards and Technology with the goal of helping communities and businesses connect to improve resource management and quality of life by using effective networking of computer systems and physical devices, often called the Internet of Things. More than 80 teams participated in this year's conference.

Feng and Jarrett Baglietto, who graduated in May, also presented the project at the Center for Environmental Inquiry's Nature!Tech conference at Sonoma State earlier this year.

Goals of the project:

• Sensors measure conditions like water level, temperature, pressure, etc.
• Identify and prioritize historical flood zones
• Use data from previous flood emergencies to optimize response and planning
• Analyze past incidents to use environmental data such as CO2 levels, pressure and air quality to help predict flood emergencies
• Self-powered for use in open space