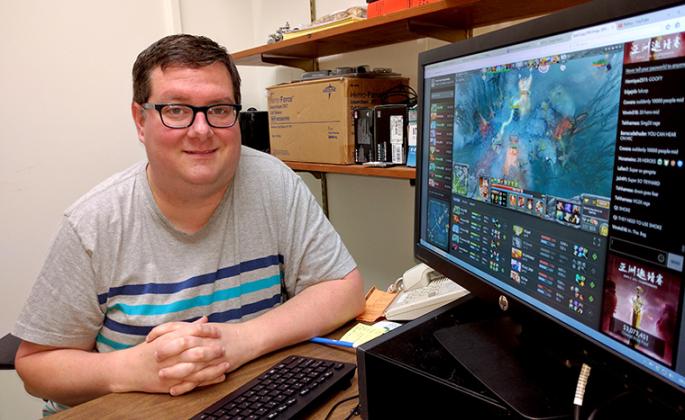 Millions of young people around the world participate in massive multiplayer online (MMO) games, and for some countries, the effects are felt beyond the computer. Sonoma State University Human Development Professor Ben Smith is studying those effects thanks to a $15,000 grant from the Spencer Foundation focusing on gaming and indigenous masculinities in Peru.

"Digital gaming in Peru is fantastically popular," says Smith, who studies the phenomenon's effect on the Southern region of Puno, a region roughly the size of Nebraska with a capital city of 150,000.

The game of choice is DOTA2, or Defense of the Ancients 2, an online battle arena strategy game that's free to play. Young Peruvian males, mostly age 13-23 play the games in internet lounges, as residential internet access in the country is rare. The lounges are packed at all hours -- even school hours -- and that has caused worry amongst parents and authorities alike.

Police sometimes raid the lounges, which are often literally underground with no signage. Though the kids are supposed to be in school, the lounges are not technically breaking any laws by serving them as customers, says Smith.

To the kids, it's just "hanging out" in the modern age, where most socializing takes place online. But this new world is fraught with its own challenges like internet bullying, and the long-term ramifications of this type of socialization are as yet unknown.

Peruvians are looked down upon by the global DOTA2 community because of their playing style, says Smith. Many Peruvians who are young and new to the game choose characters and strategies that favor individual advancement over team play.

"There's this idea that Peruvians are awful players, and not really good at strategic gameplay," says Smith. "This is part of a broader, racist stereotype about what it means to be 'Indian' in Latin America."

Despite the bullying, one reason for its popularity -- aside from the fact that's it's free, accessible and more fun than schoolwork -- is prize money. DOTA2 has the largest international gaming prize at $6 million for winning the top tournament. "There's so much economic uncertainty for these kids, it's a way for them to feel accomplished," says Smith. "Money is a part of that, to be sure, but the larger issue is also about finding one's place in a globalizing world."

MMO gaming is also widespread in Peru's capital of Lima, though the more metropolitan population has a different perspective having been introduced to online gaming earlier than Puno. Due to tremendous increase in popularity, DOTA2's parent company, Valve, added a server specifically for players in Peru in 2014.

Smith's area of expertise lies in masculinity and socialization of boys and young men. "I'm fascinated by the process through which children come to be more fully social and cultural beings, especially the way in which language mediates this process," he says.

As for DOTA2, Smith admits he's not in the running for any prize money. "I have played, but I need to get better at it," he says.

The Sonoma State University Engineering Lecture Series features lectures on mobile communications, robotics and humanitarian innovation. Lectures are the first and third Thursdays in Salazar Hall, room 2009A, 4:30-5:30 p.m. Admission is free, parking is $5-$8 on campus.