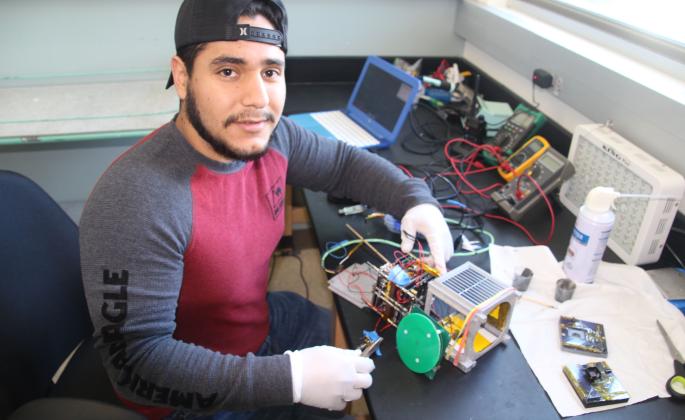 Engineering student Jesus Gonzalez joined the EdgeCube team within the past year and was responsible for making sure the hardware of the cube was working properly. 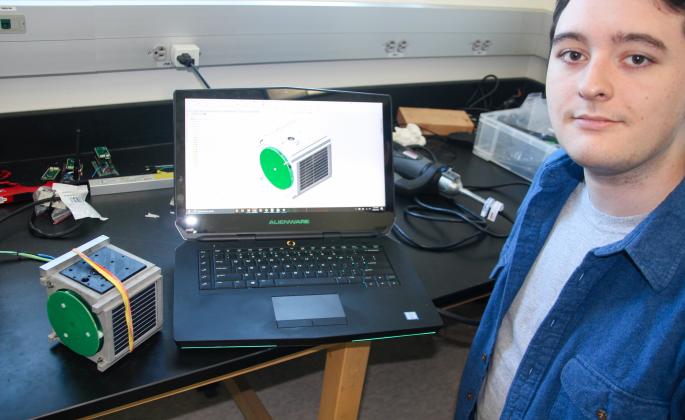 Physics student Alex Vasquez with the final version of EdgeCube. 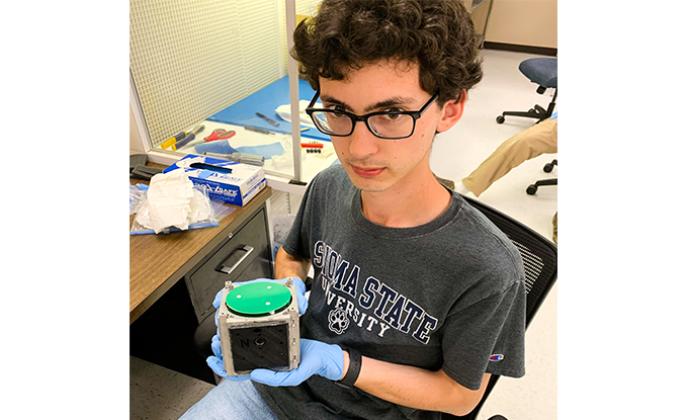 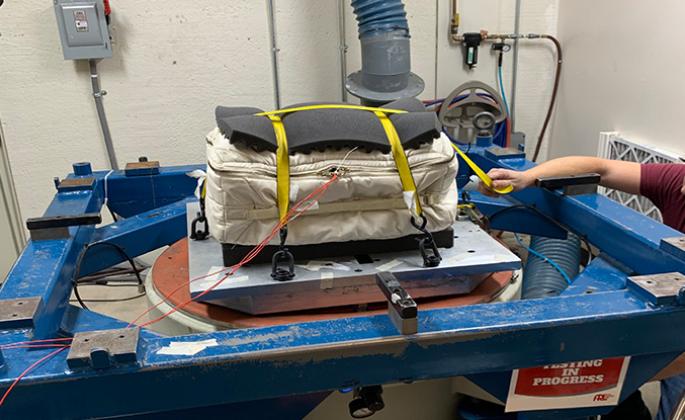 EdgeCube gets put through a shake test at NASA facilities near Houston to ensure it could handle space travel.

(Rohnert Park) — A student-built satellite about twice the size of a Rubik’s Cube has passed a series of tests to travel to space this December as part of a NASA-funded project involving three universities including Sonoma State. Built in partnership with Santa Clara University and Morehead State University in Kentucky, the “EdgeCube” satellite is scheduled to fly aboard a Space X Falcon 9 rocket on its way to the International Space Station. From there it will be boosted into orbit 500 kilometers above the Earth to collect data on vegetation health in ecosystems around the globe.

On Sept. 24, members from the EdgeCube team at SSU, led by volunteer technical mentor J. Garrett Jernigan, Ph.D., traveled to NASA facilities near Houston to put the EdgeCube through a series of tests to ensure it could handle space travel. Passing with flying colors, EdgeCube is now scheduled for launch on Dec. 4 from Cape Canaveral in Florida. The satellite will be released into its final orbit in January.

Information from the satellite will be sent back to Earth via ground station antennas atop the Student Center at Sonoma State where students from the team will be able to track and analyze the data. "I and all the students are looking forward to first contact with EdgeCube in mid-January 2020," said Jernigan.

“It makes us feel really happy and excited to know it's finally going to go up,” said David Story, a senior engineering student and student leader of the project. “We've been working on this project for the past few years, and this just feels like the culmination point.”

Sonoma State received funding for EdgeCube in June 2016, after physics and astronomy professor Lynn Cominsky wrote a proposal to NASA. The proposal called for monitoring the “red edge” of the chlorophyll spectrum in large patches of homogeneous vegetation using a CubeSat or a small satellite. Since then, approximately 30 students have worked on the project from Sonoma State, Santa Clara University and Morehead State. Professor Matt Clark from SSU's Department of Geography and Environmental Planning was the originator of the idea to measure the "red edge," hence the name "EdgeCube".

“We are greatly thrilled and relieved,” said Cominsky. “It has been a huge amount of work for the students who have been involved and the many others who have worked tirelessly to make this happen.”

While the EdgeCube team hopes it will be able to retrieve useful information from the satellite, Cominsky acknowledged the challenges that can occur from it going into space. “The satellite business is not for the faint-hearted because so many things can go wrong,” she said.

EdgeCube is not SSU’s or Cominsky’s first successful experimentation with small satellites. In 2013, students from SSU and Morehead State successfully completed and communicated with “T-LogoQube,” a CubeSat roughly half the size of “EdgeCube” that was launched into space where it measured the Earth’s magnetic field.

“We’ll have a lot of their systems in place on EdgeCube because we know it works,” said David House, who was part of the original EdgeCube team and was its student leader until he graduated with a B.S. in electrical engineering in 2017. “We have implemented those while also testing new technologies,” he said. House, who is currently in the graduate engineering program at Sonoma State, was responsible for how the satellite gathers its power while also ensuring the satellite could survive past certain points in failure thresholds.

Story, who has worked at NASA the past two summers, said the completion of EdgeCube puts Sonoma State alongside larger universities that are more known to complete these projects. “It shows that just because we come from a small university doesn’t mean we can't work on these types of projects,” he said.

Some members of the Sonoma State EdgeCube team plan on traveling to Cape Canaveral in December to watch the launch. In January, when it's time for the satellite to begin its orbit around Earth, the team will be able to watch a live feed of it being released into space. For more information on “EdgeCube,” visit CubeSat: EdgeCube.

Rohnert Park, CA — Sonoma State University has been awarded $4.96 million from NASA to design and implement a program that will engage students on the autism spectrum in...