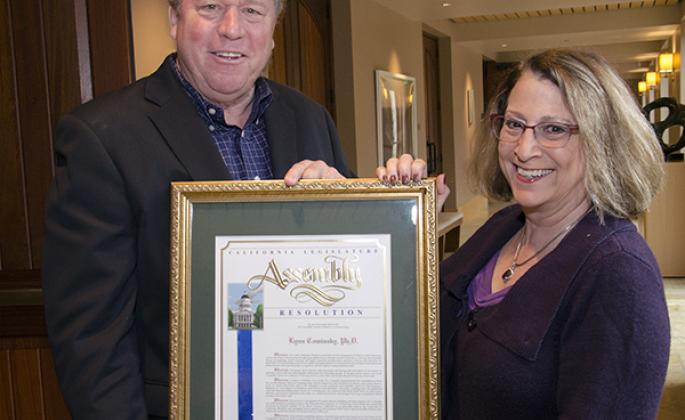 Physics and astronomy professor Lynn Cominsky continues to place Sonoma State University on the interstellar map. On Friday she received a commendation from California Assemblymember Bill Dodd for her work on the recent discovery of gravitational waves.

"Having dedicated her life to scientific research and STEM education, Dr. Lynn Cominsky is a role model for young women and can inspire others to follow in her footsteps," Dodd said. "Dr. Cominsky's important role with the observatory that confirmed a key piece of Einstein's Theory of Relativity highlights the high-quality faculty and education at Sonoma State University. We are very fortunate to have an innovative, committed researcher and teacher like her in our community."

The commendation comes less than a month after the announcement of the discovery of gravitational waves--ripples in space-time emitting from the ancient collision of two massive black holes--which proved the final part of Einstein's Theory of Relativity 100 years after it's proposal.

Cominsky has been involved with the team since 2007, providing expertise with respect to the education and outreach programs undertaken by the LIGO (Laser Interferometer Gravitational-wave Observatory) Scientific Collaboration (LSC). After her 3-year term on the PAC ended, she was so enthusiastic about LIGO's scientific potential she asked to join the LSC, and currently serves as the chair of its Formal Education Working group. Under her direction, members of SSU's Education and Public Outreach group have produced a short Educator's Guide for classroom use to explain the exciting discovery, which will be linked from the LIGO main website and is available at https://www.ligo.caltech.edu/system/media_files/binaries/303/original/ligo-educators-guide.pdf, as well as an image for Astronomy Picture of the Day (http://apod.nasa.gov).

It's been a busy year so far for Cominsky, was honored with the $20,000 Wang Award and two other astronomy education awards earlier this year.