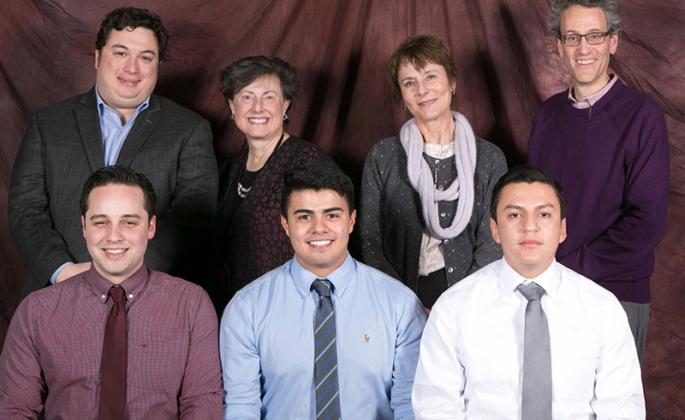 A group of Sonoma State University students has won a major innovation award for creating a pair of devices to combat kidney disease, which affects an estimated 26 million Americans.

Sonoma State engineering students Jose Avila, Nader Srouji, and Michael Vargas were awarded the I-Corps Special Recognition award at the 29th annual California State University Biotechnology Symposium in Santa Clara last month for creating not one, but two devices to detect and reduce the risk of kidney disease. One uses a spectroscopy to test urine for an excess amount of protein called albumin, and the other is an infrared camera that shows active muscles and heart rate in real time during a workout. Both were given the name SpecDetect.

According to the National Kidney Foundation, most of the 26 million Americans living with chronic kidney disease are unaware they have it. One team member has a personal history with the disease, as his own brother went undiagnosed for a time.

Starting with the at-home kidney disease test, the team found after numerous interviews that while doctors loved the product, patients were not likely to use it on their own. "Our interviews confirmed that people don't want it," says Vargas. "My own brother, who recovered from kidney disease, even said that he wouldn't buy it. It was mind-blowing."

Trying to find an edge, the team decided to start talking to personal trainers to learn how to motivate clients or patients to take better care of themselves. This led the team to a new idea that would help both personal trainers and the team's target audience of those at risk for kidney disease.

By reducing the risk of conditions that can lead to kidney disease, such as diabetes, the team would still be achieving their goal. So they decided to switch gears toward improving overall health, but still with a focus on kidney disease.

They came up with an idea for an infrared camera that shows a client's heart rate and which muscles are being used in real time during a workout. This allows trainers to communicate more clearly the proper form and technique for a given exercise, motivating their clients and creating a more efficient workout.

"They really did pull it together at the end on their own," says Sonoma State Engineering Professor Derek Decker. "It's rare to see a group of three people be as cohesive as they were with everything going against them. I am really proud of them."

By winning the I-Corps award, the SpecDetect team has a chance to apply for a $50,000 grant to keep developing their company. But their greatest reward may be the lesson that perseverance pays off. "At first others might not fully believe in the product that you're developing," says Srouji. "But if you put that aside and put your whole heart into something you believe in, it turns out pretty good."

Another Sonoma State team won an I-Corps award in 2015 for a glove that measures tremors from Parkinson's disease and sends the data wirelessly via email to a caregiver or doctor.

The Sonoma State University Engineering Lecture Series features talks circuit simulators, smart energy, how to make a radio application in seven minutes, and more. Lectures are the first and third Thursdays in Salazar Hall, room 2009A, 4:30-5:30 p.m. Admission is free, parking is $5-$8 on campus...