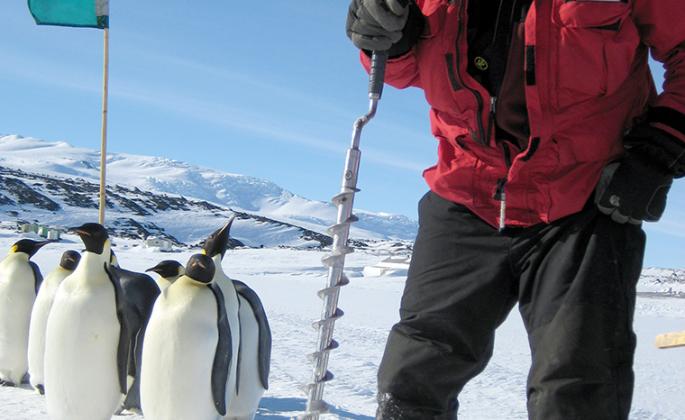 The molecular biologist is specifically studying how temperature affects fish that have evolved in sub-zero waters over millions of years. Antarctic fish, he says, are often considered extremely vulnerable to even small temperature changes. But one question his study asks is this: What might be the positive effects of global temperature increase?

Acclimating to stressful conditions like extreme cold spends energy -- energy that could otherwise be utilized for growth and reproductive effort. Warming water, says Place, could make some of a fish's internal processes, such as protein folding, more efficient, freeing up critical energy for other uses.

"It's a bit controversial," says Place. "Most people don't like to think of global climate change as having any benefits. But we know there will always be winners and losers with any change."

But even if it there may be some small benefits to these or other species, a rise in global sea surface temperatures can still turn out to be a net negative, he cautions. The same drivers of increased ocean temperatures (increased atmospheric CO2) are also driving declines in ocean pH, since one-third of the carbon dioxide in the air is absorbed into the oceans. This ocean acidification has already been blamed for die-offs of coral, oysters and other ocean creatures and may well offset any positive gains these fish might see from temperature increases alone.

Place is also researching the assumption that, after millions of years in frigid waters, these fish have completely lost the capacity to respond to a rapid increase in temperature (recent evidence suggests this response may still be present in these fish to some degree). To do this, he will test evidence of permanent disruption of the species' heat shock response by looking for mutations in the pathways that determine how proteins are folded in their cells.

This is important because in addition to Antarctic fish, other species have recently been shown to have lost their heat shock response. If this proves common across Antarctic species, it could mean the negative effects of global climate change may actually be greater than anticipated for the ecosystem as a whole.

Despite the heavy dose of molecular biology associated with this grant, some of his research techniques might sound more familiar to ice fishing aficionados: To collect his subjects (emerald rock cod), Place will drive out onto the ice, drill a hole and fish for them.

(Rohnert Park) — The picture of sea otters frolicking among kelp beds and rocky shoals has become an iconic image of the California coastline. But it may be drawing attention away from the value of other habitat that could truly help the endangered species in its recovery - estuaries...

A state of the art piece of equipment coming to SSU will aid in faculty-student research to better u
September 17, 2020

At Sonoma State University, a major piece of equipment is coming to campus this fall that will help STEM (Science, Technology, Engineering, and Math) students, and faculty...