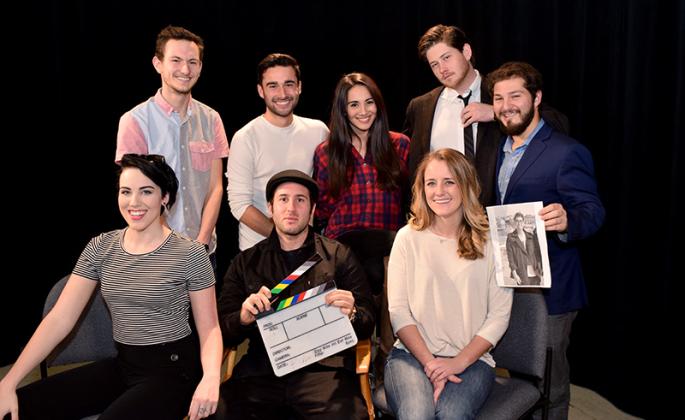 Student filmmaker Mary-Madison Baldo is understandably excited about having two films screened at the prestigious festival for the second year in a row, but not entirely surprised. "It's a product of our whole studio and everyone working with their individual passions and talents," she says.

Studio 1063 is made up of nine students, most of whom are majoring in communications but with majors ranging from education to English--except filmmaking. The crew consists of the core members of last year's team and a few new members, and the majority of this award-winning team first came together through the Communication & Media Studies Department's SSU-TV program.

"Everyone has a specialty, and there is no real film department, so we all learn from each other," says Anna Luna, a communications major who made her directorial debut with "Bobby," which took Best Director and Jury Award prizes at Sonoma State's Campus Movie Fest event. It was also nominated for a Golden Tripod (the "Academy Awards" for Campus Movie Fest) for Best Director.

The story is that of Luna's cousin, told through his little brother's eyes. A young man is rejected by his parents for being gay and is not given support when he contracts HIV. The first-person camera view even changes height over time as the brother grows up. Though it is only five minutes long, the film has the emotional weight of a 90-minute drama.

"It was a last-minute thing," says Luna. "When another project fell through, we went back to this idea." It was shot in one weekend at her parents' house.

"I don't know of any other school in Campus Movie Fest that doesn't have a film program," says Alex Bretow, the student filmmaker who attended Cannes with Baldo for a screening of two of their films last year.

Though there is class covering the basics of filmmaking at Sonoma State, students participating in Campus Movie Fest do to for fun, not class credit. "We just did this for passion," says student Kayley Kemp.

The other film being screened at Cannes is a comedy called "Slut Man Friends." Directed by Baldo,the film received a Jury Award and features Golden Tripod Best Actor nominee Sean Tadlock in a hilarious role as a sort of administrative wingman for his roommate's late night rendezvous. "Because of the success of Slut Man Friends, our company is extending the short film into a web series about the two titular men as they navigate love and relationships in the modern age," says Baldo. "We just shot two new episodes during the winter break and while filming, we laughed so hard that we often had to reshoot scenes because someone couldn't stifle the giggles!"

The annual Campus Movie Fest challenges students at 30 colleges nationwide to make a five-minute film, start to finish, in one week. Movies are then screened at a red carpet event on each campus, and the best films from all campuses are selected for screening at Cannes in May. The Golden Tripod award ceremony takes place in Hollywood in July.

The group has created a website to crowdfund a trip for four of the award-winning students to attend Cannes at https://www.gofundme.com/sonoma4cannes.