Cannes to the Future 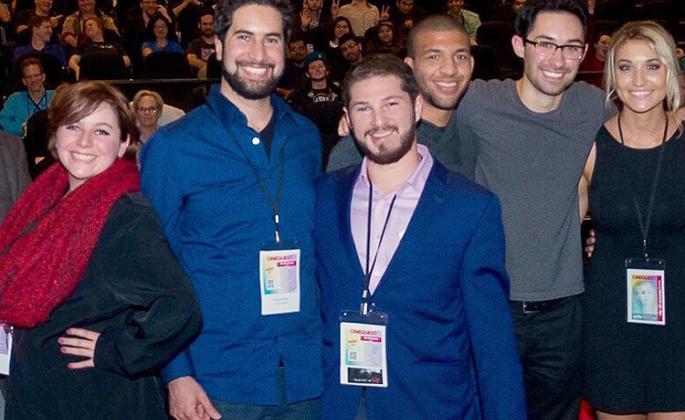 Alex Bretow, third from left, with the director and members of the cast and crew at the world premiere of "The Secret of 40" in San Jose on March 4

Alex Bretow, a Sonoma State University student whose short film was shown at the Cannes film festival last year, is producer of the first-ever horror film for Barco Escape's 3-Screen Experience. The film, "The Secret of 40" premiered at Cinequest Film Festival in San Jose on March 4 and screens again March 11 and 13.

The innovative experience involves three standard Cinema Scope screens placed next to each other. The two side screens are placed at 105-108 degree angle from the center screen, creating an incredibly immersive and massive viewing experience. "You're completely surrounded," says Bretow. "In the front rows, the screens reach beyond your peripheral vision. In the back rows, audiences experience an incredibly dynamic panoramic view that harkens back to the days of Cinerama. It really feels like you're a part of the film, experiencing the action as it happens all around you."

In a time when theaters are competing with original programming from in-home video services like Netflix and Amazon, the three-screen experience has been called "the future of film." The technology debuted in 2014, and the first two films of the "Maze Runner" series features 10- and 20-minutes of three-screen footage, respectively. Barco recently signed a five-year agreement to release films in the format with 20th Century Fox and is working on upcoming projects with producer Jerry Bruckheimer.

"'The Secret of 40' is a short film designed and shot specifically for the three-screen format, with massive panoramic shots, and even occasionally utilizing the three screens for unique content like flashbacks and distant phone conversations," says Bretow. "Our goal was to make viewers feel as if they are walking through a haunted house with our characters, feeling the power of our storytelling and performances--all while being so immersed they feel like they are actually in the film."

The film was shot and produced in the South Bay and stars Julian De La Celle ("How to Get Away with Murder," "Black-ish"), Robert Rusler ("Weird Science," "Nightmare on Elm Street") and other veteran actors.

There is a lot of youth and energy on the crew, says Bretow. He met the director, Kourosh Ahari, on his trip to Cannes with SSU film partner Mary-Madison Baldo last year after winning Sonoma State's Campus Movie Fest (Kourosh won the overall CMF Hollywood Best Picture award), and the crew for this film includes several members of Sonoma State Studio 1063, including Bretow and Co-Executive Producer Jason Nathan M. Weiss.

"This could not have been done without each and every one of their hard work," says Bretow. "It also shows on larger scale how our SSU filmmakers are involved and making an impact on the industry, and how our filmmaking community is growing and in a place to expand greatly."

"The Secret of 40" is the story of Josh, who, devastated by the loss of his mother, discovers an obscure ritual and performs it in an attempt to contact her beyond the grave. His pure intentions open unexpected doors and unleash powers beyond his control.

There are about 20 theaters that include the three-screen experience, including Airport Cinemas in Santa Rosa.

Sonoma State's NewsCenter caught up with Bretow after the March 4 premiere of "The Secret of 40."

What's it like working on such an innovative film?

Working on such an innovative film as this is amazing. There's so much real estate with the shots, which gives us a tremendous amount of creativity to explore techniques and visuals that simply aren't possible on one screen, and also poses compelling new challenges. We as a film also tread into new waters as being the first ever horror film produced for the three-screen format and the first to use wide angle anamorphic lenses, similar to that which were also used on "The Hateful Eight" and "Star Wars: The Force Awakens." We used new interesting surround sound techniques to enhance the immersion into the experience and truly make the film feel like it's happening all around the audience. It's tremendous to be a part of.

What kind of things did you do as a producer for this film?

As the lead producer for "The Secret of 40," my job was to carry and supervise the film from the beginning, when it was just an idea, all the way through completion. This went through the writing and refining of the script, casting our actors from Hollywood and negotiating with their agents, building and hiring an incredibly talented crew, managing the budget, overseeing the entire post production process, and finally, the film's completion. My job was to do everything from the large tasks mentioned before, to making sure meals arrived on time to feed the cast and crew. I also secured financing for the film.

My job was also to ensure the film's completion to the highest degree of quality attainable. While I took on many tasks myself, I truly achieved this by hiring the most apt and talented crew and department heads to carry the production by placing them in a position to succeed. The film could not have been made without the incredible dedication and hard work put forth by each and every member of our crew. For that I am incredibly grateful.

In your opinion, what's the difference between a producer and an executive producer?

An executive producer usually means one of several different things. They usually are financial investors in the film, sometimes bringing other financiers to the production, or are the writer/creator, or have been an incredibly integral part of getting the film made to some large degree. Either way, they have a large say in how the production is executed. Executive producers don't always come on set, while as a producer I'm incredibly hands-on in managing the entire production and ensuring its success and completion while concurrently managing resources and relationships.

I am very focused on producing at the moment, but only because I can't seem to escape it. I keep getting asked to produce such incredible projects, and quite frankly I love doing it, so it's hard to say no. The more I produce, the more I expand and grow in that area, and the more I get asked to do it. I would like to continue to expand in other areas, particularly in directing, and hope to explore that further down my career path. At the moment, producing is both incredibly rewarding and keeps finding me, so I find it better to listen to the call and answer it, than wait around for something else to come my way.

What the next step in your film career?

The next step in my film career is a hard question to answer. Hopefully it's making the feature length version of "The Secret of 40" for Barco and 20th Century Fox. I've also been brought on to produce two feature films. There's a lot of producing in my future, a lot of time on set, and I continually remind myself how fortunate I am to be able to continue to do what I love. It's rewarding beyond measure and I feel truly blessed.

Also, it was just announced that a film I worked on this summer, "The Fixer," starring James Franco, Melissa Leo and Rachel Brosnahan, will have its world premiere at the Tribeca Film Festival in New York, and I'm incredibly excited for the success of that film.

What did you think of the Oscars? Did "Spotlight" really steal the best picture award?

I actually loved the Oscars this year. I happened to be in Los Angeles at the time and had a surprising number of friends in attendance or working at the after parties, which made it extra special this year. I thought many of the awards were very well deserved, with a few surprises, and of course the obvious: "Mad Max" was incredible. I actually got to see "Mad Max" in Cannes this past year and knew then it was an amazing film that would cement its place in history. The director, George Miller, has been elected President of the Jury at this year's Cannes Film Festival, which is very exciting.

Did "Spotlight" steal Best Picture? Well, I have a funny story about that. I actually read an article months ago that said it would be this year's Best Picture winner. I decided to see it on that information alone, knowing absolutely nothing about the content of the film. I wish I could remember or saved the article, but it was amazing. It moved me. I think there were some other very deserving films nominated, but "Spotlight" was an incredible film that tackles an incredibly controversial and difficult topic. Not only that, but it has brought to light something in one of the world's largest institutions, and has the potential to motivate change. I think it's incredibly powerful and truly shows the influence of film in the media, and I think it's deserving of an award. Does that mean it was a "better" picture than some of the other nominated films? I don't necessarily know, but there were some other films I thought were astonishing as well.

Tickets for "The Secret of 40" in San Jose: bit.ly/secretof40tickets