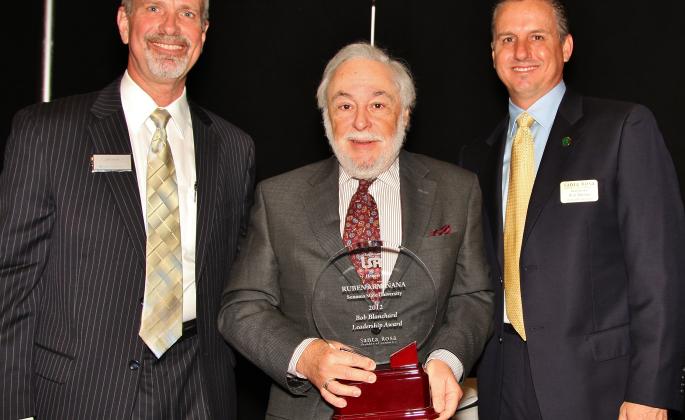 Armiñana was among a group of awardees that included leaders in the areas of agriculture, business and the economy, government, green issues and opportunities, health and human services, hospitality and tourism, media and marketing, planning and development and public safety. The leadership awards each received recognize those who exemplify the qualities of vision, service and effective collaboration
in creating a better Sonoma County.

Armiñana was not only honored for leadership excellence in the field of education, he also was selected for the overall award of the group, titled the "Bob Blanchard Leadership Award" for Armiñana's vision and efforts that have dramatically changed Sonoma State University into a 21st century well-respected.

Citing his top leadership challenges in his 20 years at SSU, Armiñana said his most recent challenge was managing through the reduction of the University's budget by more than $9 million in one year--slightly more than 27% of the campus budget.

During Armiñana's tenure, he has been successful in furthering the academic and support programs of the University, leading to Sonoma State University being one of the most popular campuses in the California State University.

Under his leadership, the University has experienced a steady increase in popularity and in private donor investment.

Through his vision, the University will celebrate the grand opening of the inaugural season of the Donald and Maureen Green Music Center on Sept. 29, 2012. The acoustically-perfect concert hall will attract audiences and performers to what is destined to be one of the greatest halls in the world.

Armiñana also has overseen the development of the campus with the opening of the Jean and Charles Schulz Information Center and the Environmental Technology Center, the renovation of Salazar Hall (to offer a central location for all studentservices, along with modern classrooms and laboratories) and Darwin Hall aswell as doubling of the capacity of residential housing to accommodate 3,100 of the campus' 8,200 students.

The building of the student-funded Recreation Center supports the co-curricularlife of students, and the partially student-funded Student Center, currently under construction, will meet the social and other needs of students.

"When I arrived in Rohnert Park Sonoma State was pretty much just cement buildings," said...