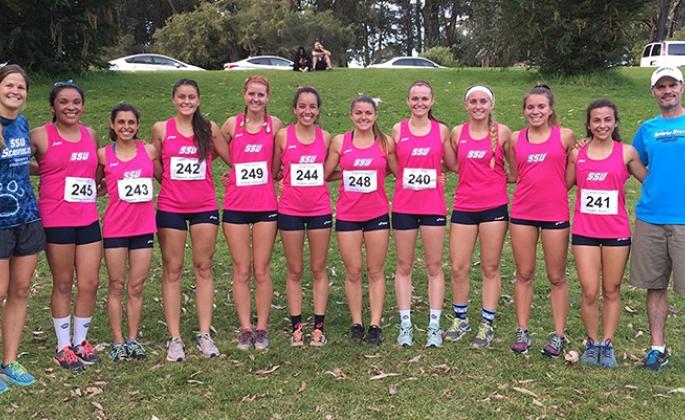 Analicia Garcia notched her second-straight individual title, winning the San Francisco State Invitational on October 7 at Golden Gate Park in San Francisco in a time of 21:56.4. Garcia crossed the line at 21:56.4, 7.1 seconds ahead of runner-up Sally Keating of UC Davis. Garcia lead the Sonoma State women's cross country team to a fifth place finish out of 14 teams, the Seawolves' best team finish at the SF State Invite in more than a decade. Garcia becomes the first Sonoma State women's cross country runner to win the SF State Invitational since Kathy Lenno won the race in back-to-back years in 2000 and 2001. Having never run in a cross country meet prior to this season, the sophomore from South San Francisco has now finished first on two occasions.

Daniel Theobald broke the scoreless tie late in the first half and Maury Lopez added an important insurance goal early in the second half as the Sonoma State men's soccer team continued to roll with a 2-1 non-conference victory over host Fresno Pacific on October 5 at Ramirez Field in Fresno. The win tonight improves the Sonoma's overall record to 5-2-4.

A Loss in the Wolves' Den: Chico Beats Sonoma State in 4 Sets

A season record of nine team blocks was not enough to stop Chico State Tuesday night in the Wolves' Den. Sonoma State fell in four sets. The Seawolves are now 4-4 in the CCAA and 6-9 overall.

Sonoma State improved 4-3 in the CCAA with a well-earned win over UC San Diego in four sets. The Seawolves played in season best form on October 8. Emily Papale had 19 kills on a .390 hitting percentage, set a career record with 19 digs, totaled three service aces and had 23.5 points on the match. Freshman Baelie Wiesner had a team high on the night and a personal season high of 26 assists in her CCAA debut.

The Seawolves fell in four sets to Cal State San Marcos on October 7. Emily Papale and Rachel Andrews lead the Seawolves in 13 kills each.

SSU Cruises to Fourth Straight SSU Invitational in a Row

Justin Shluker fired a season-low round of 66 in Tuesday's final round to capture individual medalist honors with a three-round score of 205 (-11), pacing the Sonoma State men's golf team to victory at its own Sonoma State Invitational at Foxtail Golf Club in Rohnert Park. The Seawolves won its own Invitational for the fourth straight year, recording an 857 (-7) and defeating runner-up Cal State East Bay by 20 shots. The 205 shot by Shluker and his low round of 66 on October 11, are also the best scores recorded at Foxtail Golf Club in SSU Invitational history.

Justin Shluker fired rounds of 69 and 70 in the first two rounds on October 10 and will take a two-stroke lead into the third and final round October 11 of the 2016 Sonoma State Men's Golf Invitational at Foxtail Golf Club in Rohnert Park. The Seawolves sit in first place after the October 10 action with scores of 283 and 290 for a total of 573 and will enter the final 18 holes with a 10-shot lead over Cal State East Bay.

After Madelyn Densberger finished up her last season of volleyball at Sonoma State University, the school leader in both serves and sets played planned to take a day off. That is, if jumping out of an airplane can be considered rest and relaxation.

"Once my volleyball career was over, I...

I am pleased to announce that, after a national search, Dr. Nicole Annaloro has been appointed Senior Director of Athletics at Sonoma State University, effective June 1. Nicole becomes the 11th athletic director in the history of Sonoma State...