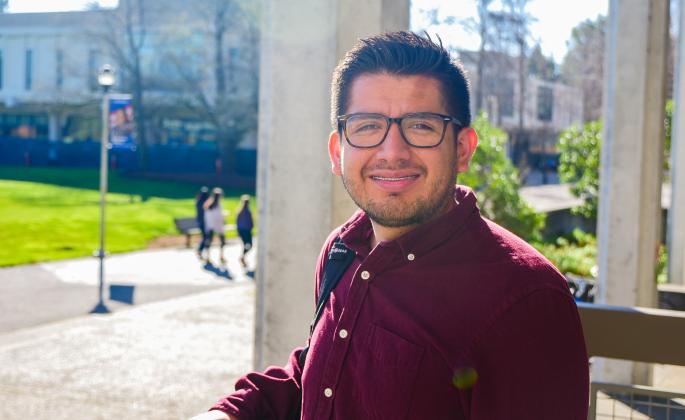 Raymundo Lopez, who is on track to receive a degree in both political science and French from Sonoma State this spring, has overcome many obstacles in his life, including spending his childhood in the foster care system with his four brothers and sisters.

Since coming to Sonoma State in 2014, Lopez, who grew up and relocated numerous times in the San Diego area, says he has drawn on his past experiences to motivate him to help others. Lopez has conducted research on the legislative process and equity in the electoral arena and has even interned for the Center for Civil and Political Rights in Africa addressing human rights concerns.

“I think for me, coming from the foster care system, my whole theme and my journey throughout college, and in my research, has been the disenfranchised,” said Lopez. “I think that's just part of my identity.”

In honor of his work and accomplishments, the American Political Science Association has named Lopez a Minority Fellowship Program Fellow for 2020-2021. The fellowship, established in 1969 to increase the number of under-represented scholars in political science fields, will help Lopez get into a Ph.D. program where he wants to research into Latino politics and minority rights.

Part of that research has already begun with Lopez’s work as a McNair Scholar where he is assessing electoral rights in U.S. territories such as Puerto Rico, American Samoa and Guam. As a McNair Scholar, Lopez is one of only 28 students selected each year, typically underserved financially or underrepresented ethnically, to receive assistance on making the transition from undergraduate to graduate or Ph.D. work.

“Ray is such an exemplary student and has really tapped into all the resources available to him on campus,” said Daniel Malpica, director of the McNair Scholars Program at SSU. “He has had to deal with so many barriers, but he always figures out how to jump over them. He understands that as a first generation student you need a support system and to rely on people that care for you.”

Despite Lopez’s dedication to his research, he hasn’t always had academics to lean on. Lopez said that because both his foster parents were immigrants from Mexico, there wasn't an emphasis at home for him to do well in school. “They had no prior background in higher education,” he said. “It was super pivotal for me to have guidance from not only my social worker's but from mentors and teachers in high school.”

Once at Sonoma State, Lopez didn't find the transition an easy one. “My first couple months I hated it here coming from a big city to a small one,” he said. “But I really have come to love the city and the campus because it's where I actually began to become myself. SSU allowed me to finally be able to pursue the things that I wanted to do.”

The now 23-year-old did use the resources available to him to explore other parts of the world. One of the most impactful experiences was his travel abroad experience to France his junior year, where he stayed with a host family who also were fostering two younger girls at the time.

“I went because I was already exposed to the Latino community and I wanted to explore more of the world,” said Lopez. “And then being able to stay with that family and have an opportunity to mentor those girls in their situation, it just felt like something that was supposed to happen.”

Looking to the future, Lopez has already received acceptance into Michigan State’s Ph.D. program for the fall and is awaiting responses for his seven other applications. Lopez said his ultimate goal is to fund his own news organization geared towards minority and electoral rights for poor people who are disenfranchised anywhere in the world.

With Lopez’s time at SSU coming to an end, he said he wouldn’t be where he is without the small university that he originally didn’t appreciate. “I think every semester I've been able to utilize the resources here at Sonoma State,'' he said. “Whether it's studying abroad, the McNair Program, a research position with the political science department, or my mentors, I think those are the reasons why I enjoyed SSU and owe a ton of my success to the people here.”