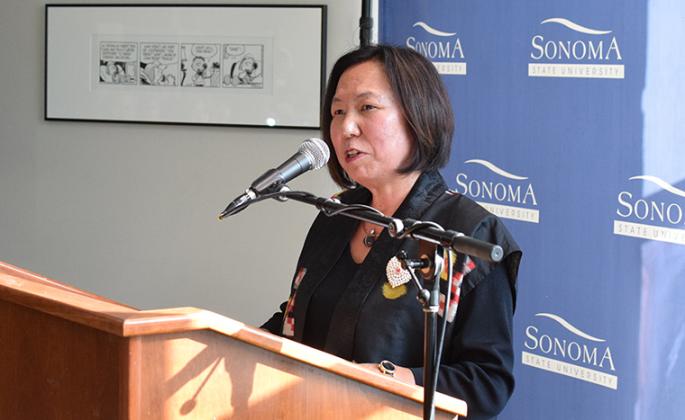 Just outside the second floor gallery is a digital exhibit highlighting the Collection. Photos, letters and artifacts from Japanese Americans of Sonoma County and their wartime experiences in American incarceration camps have been digitized and added to the collection.

The range of cultural heritage materials in these newly digitized collections includes interviews, photos, legal documents, yearbooks, correspondence, memos and artwork produced in the internment camps. "Part of the unique nature of these cultural heritage materials is that they offer regional stories that have in many instances been known previously only to local communities," says Lynn Prime, special collections and university archives librarian.

SSU Special Collections is one of 14 campuses involved in the California State University Japanese American History Digitization Project, a multiyear effort identifying, digitizing and providing access to important Japanese-American historical materials on a central website. This California history project is funded by grants from multiple agencies, including the National Endowment for the Humanities and the National Park Service's Japanese American Confinement Sites Program.

Many CSU campuses have received support from community members and local organizations such as the Japanese American Citizens League. Thanks to the Sonoma County JACL, SSU has been able to substantially increase its North Bay Ethnic Archive with letters, photos and audio interviews that reflect the war years endured by North Bay Japanese-Americans at Colorado's Camp Amache.

The University Library Art Gallery exhibition will be up through December 23. Admission is free, parking is $5-$8 on campus. The Digital Special Collections exhibit is up indefinitely at csujad.com/csuscollection.html

"We know a lot of people self-curate these materials in their homes, and we wanted...